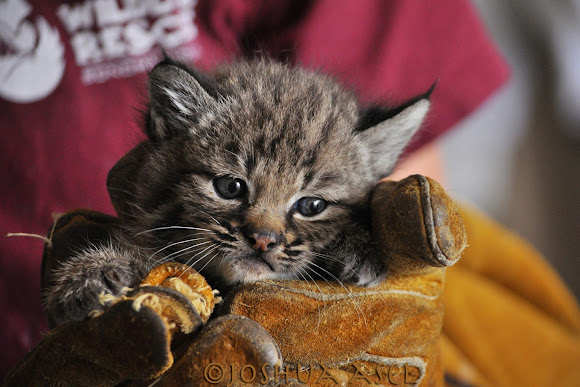 The female raises the young alone. One to six, but usually two to four, kittens are born in April or May, after roughly 60 to 70 days of gestation. Sometimes a second litter is born as late as September. The female generally gives birth in an enclosed space, usually a small cave or hollow log. The young open their eyes by the ninth or tenth day. They start exploring their surroundings at four weeks and are weaned at about two months. Within three to five months, they begin to travel with their mother. They will be hunting by themselves by fall of their first year, and usually disperse shortly thereafter. In Michigan, however, they have been observed staying with their mother as late as the next spring.

This cute little bundle of fury came in right when I took the pictures. This bobcat kitten was found on the side of the road after her mom was killed by a car. She is out in an enclosure so that she can grow up with minimum contact with people. As Janet, one of the staff, grabbed her and held her, she unleashed attacks of pain onto the thickly layered leather gloves of Janet, hilariously causing no damage whatsoever. But she did defecate to try and ward us off, hence the poop-tail. The baby bobcat's body has no damage and is expected to be released far down in the future.

Thank you celestialprincess101 and Laura33! Sorry I didn't get back to you sooner.

Adorable in so many ways!!! I am jealous of the person who is holding him/her xD

thank you for all the comments everyone! but as cute as it is, it belongs in the wild. so if you see a wild animal like this hurt somewhere, be careful because it's dangerous and be sure to call your local wildlife rescue to come help it :)

Haha thanks guys. No name, just a number :) it will be released so we don't name them.

Thank you Sergio, appreciate it :)

Thank you ShannaB and Macaw :)

Thank you Tic and 4D4. It is sad but we're happy she's a fighter!

so cute:) and such a poor thing. its very sad to hear that her mother died from a car, such a brave little fellow.

Thank you Adarsha, Debbie, Sckel, and gatorfellows for your comments, really cool :)

Congratulation on a sweet SOTD :)

and 65 other people favorited this spotting