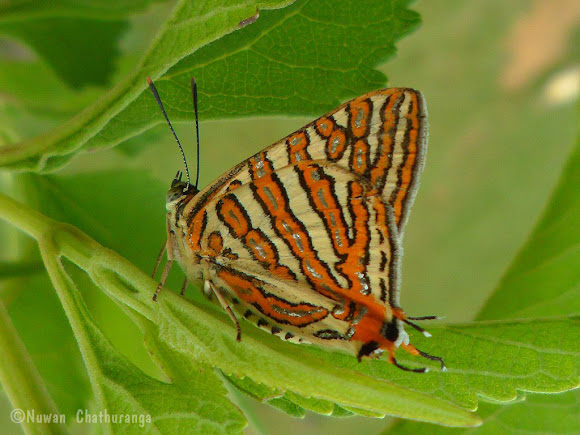 These butterflies can be recognized by their plumbeous or lead color of the upper side of the wings. The upper side of the fore wing has bands which are reddish orange. The 3rd is bifurcate but it is not as long as Spindasis vulcanus, which stops at vein 3. It meets another faintly outlined band which connects to band 5. The 4th has two distinctly separate, two distinctly separate silver centered spots, each marked clearly with its own black outline.

more encountered in open country in the hills than it is in the lowlands.

thank you everyone for your well wishes and great comments.

Wow!
Both are reasons to celebrate!
Congrats Nuwan!

NuwanChathuranga, Congratulations on the SOTD, a most beautiful Butterfly and the 1000 spottings...WOW!! Thank you for sharing all those great spottings.

A big congratulations to you Nuwan for your beautiful SOTD.

Congratulations and cheers Nuwan for the SOTD!

Congratulation Nuwan, on a very well deserved honor on your achievements towards the community !

Nuwan, congratulations on hitting 1,000 and for earning another well-deserved Spotting of the Day with this beauty! You are in an elite club with over 1,000 spottings and over 2,600 species IDs! Thanks for your incredible contributions to the community.

Congratulations on SOTD & your 1000th! What a special milestone!

Thank you again everyone for the kind words! :)