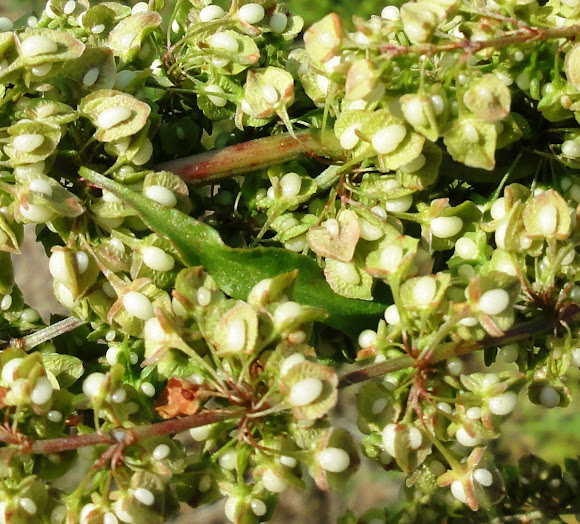 The mature plant is a reddish brown color, and produces a stalk that grows to about 1 m high. It has smooth leaves shooting off from a large basal rosette, with distinctive waved or curled edges. On the stalk flowers and seeds are produced in clusters on branched stems, with the largest cluster being found at the apex. The seeds are shiny, brown and encased in the calyx of the flower that produced them. This casing enables the seeds to float on water and get caught in wool and animal fur, and this helps the seeds to spread to new locations. The root-structure is a large, yellow, forking taproot.

Curly Dock is a widespread naturalized species throughout the temperate world, which has become a serious invasive species in many areas, including throughout North America, southern South America, New Zealand and parts of Australia. Curly Dock grows in a wide variety of habitats, including disturbed soil, waste areas, roadsides, fields/meadows, shorelines, and forest edges. It prefers rich, moist and heavy soils. Listed as Invasive: http://invasive.org/browse/subinfo.cfm?s...

Spotted on a road-side embankment near a playground. Finches and bluebirds seemed to be attracted to the seeds or the insects on them.

Glad to help.
There are probably many species in the states,as there are in Britain.
And many hybridize.The different seeds are the best I.D.from one species to another.

Thanks Lenny! That pointed me in the right direction :)

This is a species of Dock.Rumex sp.
I'm not familiar with American species.
Hope this helps.