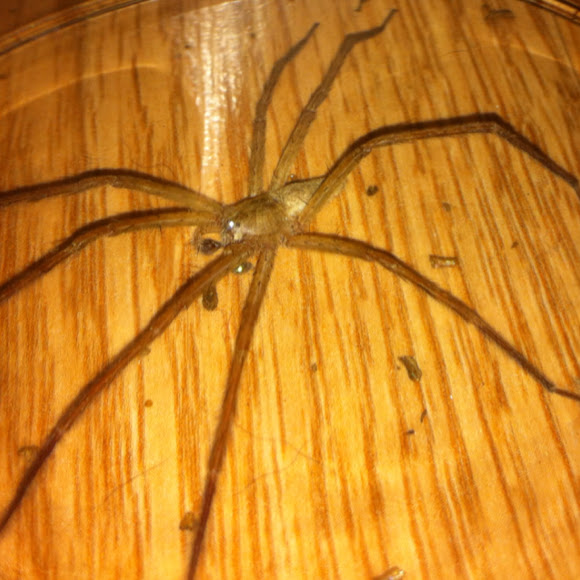 Repost from Wikipedia: [Brown recluse spiders build irregular webs that frequently include a shelter consisting of disorderly thread. They frequently build their webs in woodpiles and sheds, closets, garages, plenum spaces, cellars, and other places that are dry and generally undisturbed. When dwelling in human residences they seem to favor cardboard, possibly because it mimics the rotting tree bark which they inhabit naturally. They have also been encountered in shoes, inside dressers, in bed sheets of infrequently used beds, in clothes stacked or piled or left lying on the floor, inside work gloves, behind baseboards and pictures, in toilets, and near sources of warmth when ambient temperatures are lower than usual. Human-recluse contact often occurs when such isolated spaces are disturbed and the spider feels threatened. Unlike most web weavers, they leave these lairs at night to hunt. Males move around more when hunting than do females, which tend to remain nearer to their webs.]

Kill 'em quick. In NC I normally see lighter brown Recluse, but the large fangs are a dead give away. My advice for the willing: catch one in a glass, take photos and videos, share and connect with others. These are nasty mothers. Familiarize yourself with it for your own household safety.

This is a male nursery web spider (Pisaurina mira). I did my PhD work on this species mating behaviors

Absolutely not a recluse of any sort. This is a male, most likely a Lycosid of some sort.

I am no expert but I would revisit the ID on this spider. notice the spines on the legs, brown recluse spiders do not have these. Sorry but was looking through photos and ran across this one.

Wow that's a big one!