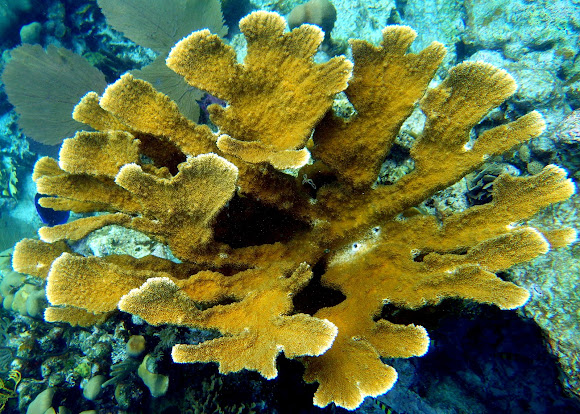 This incredible coral species was spotted while snorkeling in the Caribbean off of Belize. This was a very exciting find, as I was not expecting to get to see this species due to its endangered status. Spotted at a depth of about 15 ft (4 meters) in an area of relatively significant current.

Found primarily in shallow waters with temperatures between 26 and 30 °C (79 and 86 °F), and with significant water movement. Distributed throughout the Caribbean, the Bahamas, and Florida Keys.

This species is listed as Critically Endangered but the IUCN and was once one of the most abundant species of coral in the Caribbean and the Florida Keys. Since 1980, an estimated 90-95% of elkhorn coral has been lost. Elkhorn coral is considered to be one of the most important reef-building corals in the Caribbean and it was the first coral species in the world to receive protection from the Endangered Species Act.

Great series Marylou,congrats on the well deserved SOTD and thanks for sharing

Congratulations Marylou, your Elkhorn coral has been chosen to illustrate Endangered Species Day. We hope you are well!

"Today is #EndangeredSpeciesDay - a day to raise awareness for all species listed as threatened. While there is sadly no shortage of charismatic species on the International Union for Conservation of Nature's Red List, only a small percentage of invertebrates (animals without a backbone) have been assessed for their conservation status. Still, the large majority of all known animal species are invertebrates. Habitat loss, pollution, invasive species and climate change are the biggest threats to invertebrate diversity. In our Spotting of the Day you can learn about the Critically Endangered Elkhorn coral (Acropora palmata), a once abundant coral species which has seen a dramatic population reduction exceeding 80% over the past 30 years".