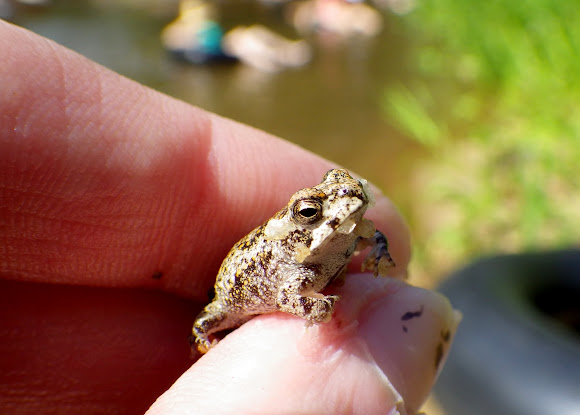 Spotted along the water's edge of southern Stann Creek in the foothills of the eastern slopes of the Maya Mountains within the Cockscomb Basin Wildlife Sanctuary. This was a recent metamorph, of which there were many more. Adults typically range from 85 - 150 mm, but adult females can reach lengths of up to 225 mm.

Can live in a wide variety of habitats, but typically humid areas with adequate cover. It not only thrives in, but seemingly prefers degraded man-made environments.

Naturally occurring populations are found from the southern tip of Texas and northwestern Mexico to central Brazil. This toad has been extremely widely introduced throughout the world, and often out-competes native species. Introduced populations have been established in the Caribbean and Pacific regions (including southern Florida, Puerto Rico, Hawaii, Jamaica, Hispaniola, Aruba, Guam, the U.S. Virgin Islands, as well as many other tropical & subtropical locations; also New Guinea, Philippines, China, Taiwan, japan, and much of Australia.