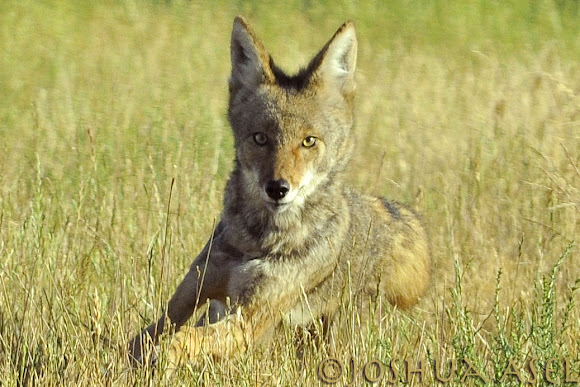 Though coyotes have been observed to travel in large groups, they primarily hunt in pairs. Typical packs consist of six closely related adults, yearlings and young. Coyote packs are generally smaller than wolf packs, and associations between individuals are less stable, thus making their social behavior more in line with that of the dingo. In theory, this is due to an earlier expression of aggression, and the fact that coyotes reach their full growth in their first year, unlike wolves, which reach it in their second. Common names of coyote groups are a band, a pack, or a rout. Coyotes are primarily nocturnal, but can often be seen during daylight hours. They were once essentially diurnal, but have adapted to more nocturnal behavior with pressure from humans.

This Coyote was rehabilitated at the Sonoma County Wildlife Rescue center for 3 months. Amazingly, being totally lucid, during exams she would let us handle her without trying to bite or nip. So, this is her release! When we asked the owner of the land, from which she came from, if we could return her back there. He replied, "You can, but I'll shoot her." ... So obviously not wanting to return her to there, a neighbor about a mile away agreed to release her on his land. With the whole family and some neighbors watching, this landowner had the honors of releasing it from the kennel. She looked out for about 2 seconds, crept out fast but sneakily and then ran for it! Seeing me and another photographer in her way she reeled back and turned back towards the people, then seeing them, turned back again and headed to the left of me, disappearing into the long grass and vineyards. My friend who lives there told me today he couldn't get to sleep because she has been howling near the house. Showing that she is in great shape and doing well.

Wow that's so freakin sad. I was just having a conversation about people demonizing coyotes, today. People just like to blame their problems on an easy target instead of taking care of business and looking at the bigger picture.

Awesome release! Love this. Coyotes have been demonized in our farming area. I think they are area truly amazing. I smile when I see them, because I know they are keeping things in balance, and also because they are so secretive. I don't see them often, that is for sure.

Hahaha thanks so much Tic, Carlos, and bherath20 for the kind words :)

nice story thanks for sharing
love it

Thank you very much for the information. Now I know that it was definitely coyote and a female. The textures of the fur was dried out grey, rough and uneven, not shiny like your coyote in the picture. But, Wikipedia says that coyotes shed once a year, beginning in May, so that explains that.

This is a Coyote for sure. Obviously, you got a better look than I did so she could very well be sick, but in the video she looks like she has a really healthy coat of fur. Other than that i cannot tell. thanks for sharing the video! :)

Sorry, here it is. http://youtu.be/yq8GovLhuyE

hmm. the website says the video doesn't exist. any pics you can send me?

well that's nice to see but a shame to hear it's not doing good. where do you live?

I saw a single coyote crossing my land last week (I think it was, or could be wolf?) It was rather early morning and he/she did not look good at all to my eyes. This was my first time seeing coyote here and I wanted to take a picture, but I was not successful (though I made a very short video).
As I said, the coyote did not look healthy, so I did not even bother to post it.
I hope he/she is okay...

whoa really? Thank you RiekoS and vanvliet14 for you appreciation and kind comments. :)

Beautiful pictures! And, thank you very much for sharing the story with us.

Thank you so much Mona, ceherzog, Maria, Yuko, and willie! :) The thing is, we have to release her within 3 miles of where she was originally rescued. We all really wish we could release her somewhere further, but we're also happy we found someone that is actually open to releasing a Coyote on their property. Hopefully she stays safe and in the area. :)

Wonderful story and I hope she will make it to have a good happy life!

Wonderful rehab story! A mile from the land where she was originally doesn't seem so far, so I wonder if she will make her way back there. Hopefully not, as the landowner has already announced he will kill her.