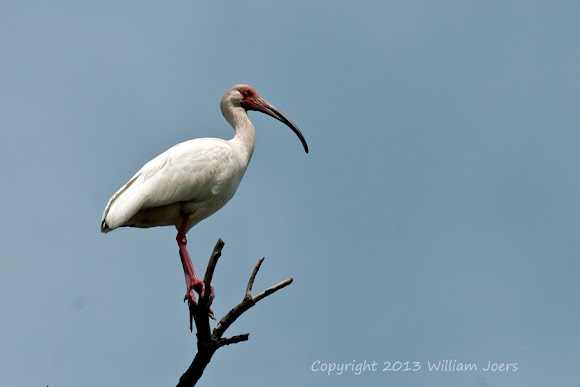 The American White Ibis (Eudocimus albus) is a species of bird in the ibis family Threskiornithidae. It is found from the mid-Atlantic and Gulf Coast of the United States south through most of the New World tropics. This ibis is a medium-sized bird with an overall white plumage, bright red-orange down-curved bill and long legs, and black wing tips that are usually only visible in flight. Males are larger and have longer bills than females. The breeding range runs along the Gulf and Atlantic Coast, and the coasts of Mexico and Central America. Outside the breeding period, the range extends further inland in North America and also includes the Caribbean. It is also found along the northwestern South American coastline in Colombia and Venezuela. Populations in central Venezuela overlap and interbreed with the Scarlet Ibis. The two have been classified by some authorities as a single species.

Found in a lake that was almost completely drained this spring because of fear of a dam failure. Spotted with over 140 Great Egrets ( Ardea alba ) and a few dozen Great Blue Heron ( Ardea herodias ).

This bird is a very common bird to the gulf States and places further south. IT IS VERY VERY VERY RARE TO BE SEEN IN WISCONSIN. So rare in fact that this is only the THIRD time it has been sighted in our State. The records of the other two sightings are listed as follows: May 31, 1978 in Marathon County, Wisconsin Sept. 10 14, 2002 Burnett County, Wisconsin.

Thank you Carol Snow Milne, I was happy to see it, I was thrilled when I was able to hike in close enough to make these captures. This bird is a life bird for me and the second record breaking bird I have seen and photographed in my State this year. I consider myself blessed.

Congratulations on this extremely rare sight of this particular bird in your area. WOW!

Thank you so very much for being the first one to favorite this spotting, Sarala Jeevanthi Gamage