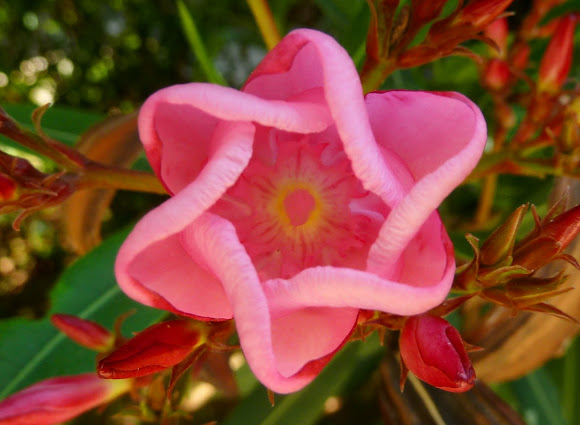 It is an evergreen shrub (or small tree) that grows to approximately 6 m. A sticky latex is exuded if the stem is cut. Leaves are usually in groups of three and narrowly lanceolate. The flowers are tubular with five lobes, red or pink in the wild, but in addition may be white, cream, yellow or purple in cultivars, and double forms have also been selected. Some are scented. I think is quite interesting how opening of this flower formed Star of David :). The fruit is composed of a pair of follicles that split along one side to release the seeds. The seeds are oblong, with a plume of hairs at one end. It is a highly toxic plant that has been cultivated as an decorative plant since ancient times. There is an interesting fact: Alexander the Great in his military campaigns is said to have lost men as a result of eating meat skewered on the highly poisonous Nerium twigs. Another interesting story comes from the locals here: the local dish that is typical in Istria is manestra and there is a legend that if the husband was infidel, the wife would cook for him la manestra with oleandar leafs, actually I have never heard that anybody was poisoned by Oleandar but the legend always intrigues.

Native to the Mediterranean region, Iran, the Indian subcontinent and southern China. This one is growing in my garden, was planted approximately 50 years ago by my grandparents and 20 years ago it reached the size od 2 m. But when we wanted to redecorated our garden we tried to dig it out but obviously some roots have remained and now we have same size, over 2 m big plant again ;)

Oleander is an outdoor shrub, popular for its evergreen qualities and delicate flowers. Found commonly in warm locations (e.g., along highways in Hawaii, California, Texas, etc.), all parts of this plant are poisonous to multiple species (e.g., dogs, cats, humans, horses, cattle, etc.).
There are many many animation talks about this kind of flower, such as Mononoke. Pretty flowers only for look not for touch:)

Great picture! It looks loke the Star of David!

I am very familiar with oleanders as they were part of everyone's landscape on the Texas coast. I am moving back and setting up an RV Park named Oleamders. I have never seen this bloom. Would you send me a cutting to root or tell me where I can purchase one. I will be planting several on my property..tabshire49@gmail.com

injica, thankyou for your sincere response. If you can take a picture like that there is nothing wrong with your education. Many future successes to you as well.

Excuse me for not being sufficiently educated, but what are you saying to me and JimElliott? The article (and every other description of the species I have been able to find) says the flowers have 5 lobes. If you look at the third picture, that is exactly how many lobes (or petals) that flower has, and that picture is consistent with every oleander flower I have ever seen, from the coast of Georgia to the coast of Southern California. The partially opened flowers in the first two pictures obviously have 6 lobes, which is not characteristic of the oleander flower. I suppose it might be possible to have a six-lobed oleander flower the same way it is possible to have a four-leafed clover (or a two-headed cow), but I wouldn't use it as a representative picture.

It is not helpful, however, for you to respond with insults such as your comment to Jim. He was merely pointing out, as I attempted to do, the inconsistency in the description of the flower as having 5 lobes and the pictures showing one with 6 lobes. Your responses would be more helpful if you could address the issue raised rather than implying that there is something lacking in the commenter's education, math or geometry.

Pictures 1 and 2 are really great.

Xulliann, also a bit more of education, btw photoshop is not allowed on NP

It needs to be explained how a 5-petal bud produces a 6-petal flower. It appears too organic for any computer simulation. The lighting on the flower is very unique and the petal edges appear not to have been inlaid over another picture.. Until someone explains more we will have to accept that it is a wonder of creation and an excellent photograph.

Are all four pictures of the flowers from the same plant?

I agree JimElliott. I spent all day looking for. You are right it's not what they say it is. If it is real I would love to know what it is and where to find them. Thanks

Wow. Found your post. That's good because many have been thinking the flower was faked but this page seems like the source instead of scintech.com which is usually tagged in this picture. I suggested it may be possible to see the flower if you are taking the picture at the right moment after the bud opens but couldn'd find any other picture. Here is what Shlomit Heymann said
Yesterday at 3:39am: "if this flower is "Nerium Oleander" than this photo is fake since these flowers does not look like that. I know this flower we have it everywhere. Also, if this photo was true, than more photos of this flower would be shawn, but this is the only image that can be found all over the Internet. So this flower is not real." Thanks.

if its an oleander, then what is this flower?

Curious..did you take all 4 photos from the same plant? Perhaps its the odd/lucky flower to have 6 petals instead of 5? Beautiful nonetheless

iqlaw, please, educate yourself a bit more, read, learn and study....you have a long way to go

Yes, it's lovely and it does look like a star of david, which has 6 points, not 5. Thus this is NOT an Oleander.