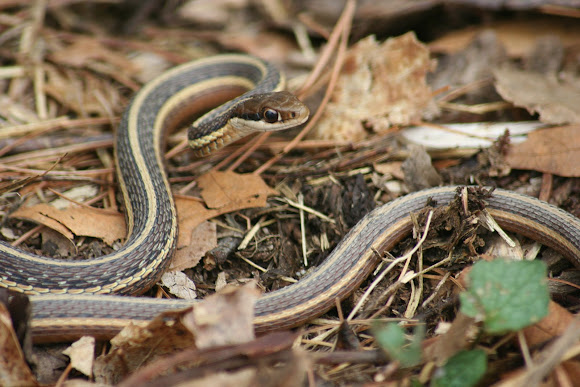 The eastern ribbon snake gets its name from its very thin body. At maturity, it grow to 18 to 86 cm in length.[3] It is a slender, black snake with a yellow mid-back stripe and one on each side. A brown stripe of one or two rows of scales extends onto the sides of the belly. The rest of the belly is a greenish-white color. It also has two rows of black spots between the back and side stripes. It also has a long tail that is about a third of the length of its body. The labial scales around the mouth of the snake are unmarked and uniformly bright yellow or white. A white or light-yellow bar borders the front of the eyes.[4] Juveniles are colored like adults.[5] Some aspects of the eastern ribbon snake make it different from a close relative, the garter snake. The eastern has a much thinner body than a garter snake. Its tail makes up about one third of its body length. This snake has stripes on the third and fourth scale rows. The eastern ribbon snake has pure white lips and a mark of white color in front of its eyes.

The eastern ribbon snake is typically found in the northeastern United States and southeastern Canada, usually in wetlands and near the edges of ponds and streams.[6] They are found both in and out of water; they are adapted to both environments. When they are frightened, they take to the water or bushes. They do not dive like water snakes; they glide across the surface of the water, instead.

An aggressive and adorable little serpent.

great fact about gliding across water.