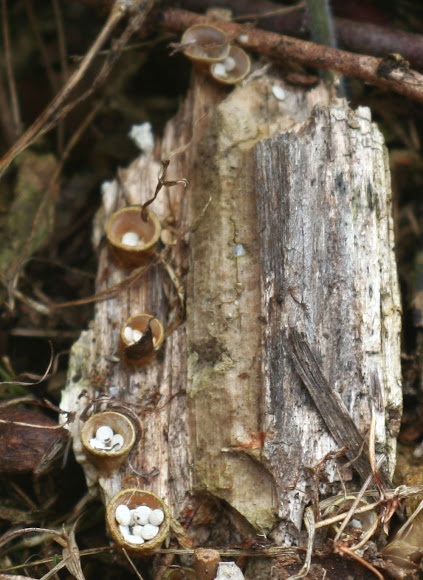 "Crucibulum species have light tan to cinnamon-colored fruiting bodies, known as a peridium, that are cup- or crucible-shaped. Depending on the species, the size of the peridium may range from 2–4 tall by 1.5–3 mm wide at the mouth (for C. parvulum) to 5–10 mm tall by 5–8 mm wide (for C. laeve). Viewed microscopically, the wall of the peridium is made of a single layer of tissue, in contrast to the three-layered peridium wall in Cyathus species. The outer surface of the peridium has hyphae that agglutinate so as to form a texture with visible filaments, a condition known as fibrillose; this outer layers of hairs typically wears off with age to leave a relatively smooth surface."

"Like other bird's nest fungi, Crucibulum species are saprobic and derive their nutrients from decomposing organic matter. They are typically found growing on wood and woody debris such as stems, twigs, wood chips, old nut shells, and old matting..."

I have only seen these minuscule fungi once in my life and I was happy to have my camera with me! I had no idea what they were until identification later.

Thanks for the comments Mark and Hema!

When I first found some I thought they were just tiny, fallen gum nuts.

A very fascinating fungi. Nature is amazing for sure. Make's me wonder who designed all this?

Oh yes, they are tiny. I had never seen anything like it before. My friends were wondering what I was doing face down in a field. Very cool organism. I've read the cup is designed as "splash cup". Supposedly when rain falls it splashes and scatters the capsules.

Ignore the question mark. What i meant is that I am sill looking for these.

Still looking for these? Are these really that tiny that you could bypass them?

Her restoration and current use as an environmental education boat is truly inspiring.

Thanks. I found some images of her. Truly magnificent. I also built yachts for many years and developed a deep appreciation for the older ones like this. Credit to whoever is keeping her going !!

Thanks Mark. The vessel is A.J. Meerwald, a 1928 Delaware Bay Oyster Schooner.

Hi ulvalactuca77... Nice find. Crucibulum is a genus so in the scientific name you could put "Crucibulum sp." After a quick look through the half dozen species of Crucibulum in the USA I think there's a good chance your could have "Crucibulum laeve" which is the most common one having no internal striations, thin walls and large silver peridioles. http://www.mykoweb.com/CAF/species/Cruci...
Also if you copy and paste text from other websites (such as Wikipedia) it is correct to put it into quotes and specify the source. I would also remove the Wikipedia references (eg. [13]) as they make no sense in this forum. (Being a keen sailor I love you profile pic btw - what sort of vessel is it?)