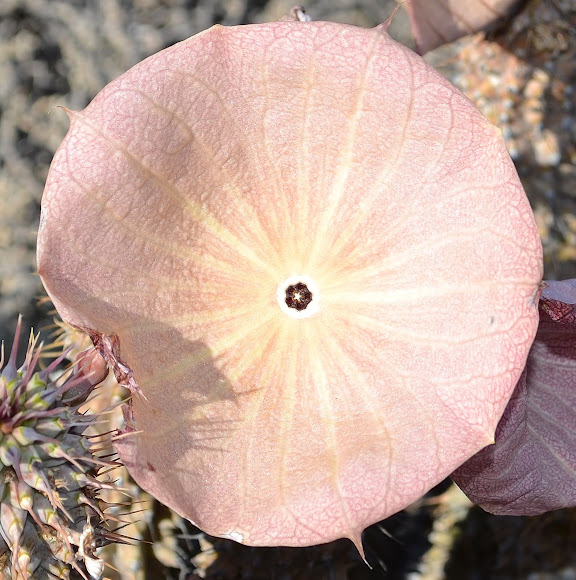 Found in the arid semi desert of the Tankwa National Park.

Media coverage The BBC reported on the Hoodia gordonii plant in 2003. On November 21, 2004, 60 Minutes aired a report on the effectiveness of the Hoodia gordonii plant as a natural appetite suppressant. Prior to this 60 Minutes report, there were a total of three hoodia products on the U.S. market and Hoodia gordonii was being sold by African farmers at US$13 per kilogram. In 2007, there were an estimated 300 products being sold worldwide being touted as "authentic Hoodia gordonii" with a street rate for Hoodia gordonii at $250 per kilogram on average. As of November 2008, the street price of Hoodia gordonii has dropped to $130/kg for wildcrafted Hoodia gordoni and an estimated $85 for cultivated Hoodia gordoni material. The media coverage and heavy marketing by nutritional supplement companies that followed those reports have created such a demand for Hoodia spp. plants that a protected status was imposed in several countries like Namibia. Many products claiming to contain Hoodia spp. do not actually contain the active ingredient alleged to suppress appetite. An ongoing review of hoodia pills by Alkemists Pharmaceuticals found that at least half of the products advertised as containing hoodia contained none.