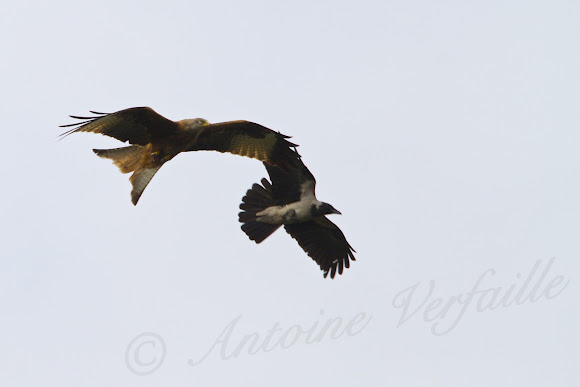 The Red Kite (Milvus milvus) is a medium-large bird of prey in the family Accipitridae, which also includes many other diurnal raptors such as eagles, buzzards, and harriers. The species is currently endemic to the Western Palearctic region in Europe and northwest Africa, though formerly also occurred just outside in northern Iran. It is resident in the milder parts of its range in western Europe and northwest Africa, but birds from northeastern and central Europe winter further south and west, reaching south to Turkey. Vagrants have reached north to Finland and south to Israel, Libya and Gambia. The Hooded Crow (Corvus cornix) (sometimes called Hoodiecrow) is a Eurasian bird species in the crow genus. Widely distributed, it is also known locally as Scotch Crow, Danish Crow, and Corbie or Grey Crow in Ireland; Grey Crow is also what its Welsh name, Brân Lwyd, translates as. Found across Northern, Eastern and Southeastern Europe, as well as parts of the Middle East, it is an ashy grey bird with black head, throat, wings, tail and thigh feathers, as well as a black bill, eyes and feet. Like other corvids it is an omnivorous and opportunistic forager and feeder. It is so similar in morphology and habits to the Carrion Crow (Corvus corone) that for many years they were considered by most authorities to be merely geographical races of one species. The fact that hybridization was observed where their ranges overlapped added weight to this view. However, since 2002, the Hooded Crow has been elevated to full species status after closer observation; the hybridisation was less than expected and hybrids had decreased vigour. Within the Hooded Crow species, four subspecies are recognized, with one, the Mesopotamian Crow, possibly distinct enough to warrant species status itself.

As I was in Corsica this may, I saw a hooded crow and a red kite playing in the air. At first it looked like the crow was chasing the kite like the do more often. But later I saw them flying next to one and other in perfect harmony. As the kite sometimes landed in a tree the crow went and sat right next to it.

Lovely series! I think you added it to the wrong mission: Interaction between different species of Arthropods :-)