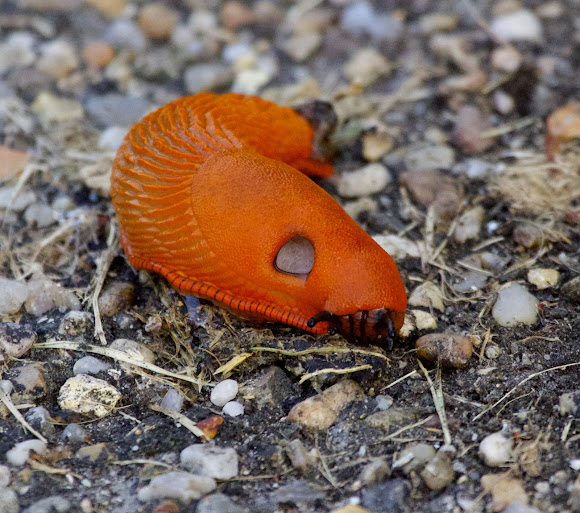 At most, a full-grown red slug can extend to be approximately 18 cm (7 in) in length; although they usually only grow to be 7–10 cm (2.7–3.9 in) long. Its genus, Arion, is derived from the name of the legendary Greek poet Arion. Its species name, rufus, is Latin for red. Although very often brick-red or brown in coloration, Arion rufus can also be greenish-brown, black, yellow, or orange. Perhaps the red slug's most noticeable feature is the placement of its pneumostome just before the midpoint of its mantle. Like all slugs, the red slug moves relatively slowly, using the muscular contractions of the underside of its foot, which is mostly red with stripes. The red slug, like all other slugs, uses two pairs of tentacles to sense its environment. The darkly-coloured upper pair, called optical tentacles, is used to sense light. The lower pair provide the red slug's sense of smell. Both pairs can retract and extend themselves to avoid hazards, and, if lost to an accident or predation, can be regrown.

This slug is mostly found in Denmark, where it was introduced by some scientists into a forest near Silkeborg in 1913. As a result of human intervention it spread to the rest of East Jutland and has since migrated to Germany, Great Britain, Luxembourg, Norway, Poland, Italy, Sweden, and recently, France. They are a serious problem in vegetable gardens.

No, you don't want! And they are toxic so they have no predators. They just eat everything they can find, hopefully they won't spread more.

I don't want him in my garden!!

Thanks guys, yes it is a crazy species with crazy color and history :)