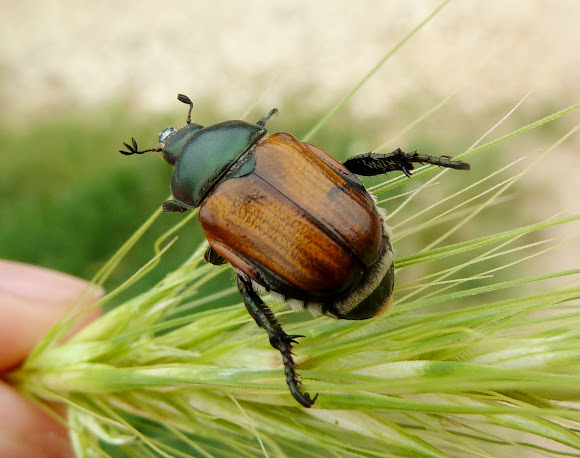 Their size can range from is from 7 - 11 mm. Antennae black or with basal segment brown, club with three lamellae in both sexes. Head and pronotum bright metallic green with long outstanding pubescence. Head much more densely punctured than pronotum. Pronotum bordered throughout, front angles protruding and enclosing a small depression. Hind margin strongly sinuate. Scutellum metallic and punctured as pronotum. Elytra light or dark chestnut brown, darker laterally and along suture and with long, erect dark pubescence throughout. With prominent raised shoulders and regular strongly punctate striae although the puncturation tends to be confused basally. Last two abdomnal segments exposed although strongly deflexed so not usually visible from above. Legs and underside black. Adults emerge from April to June usually leaving the pupae in a mass emergence during mid morning and then swarming in bright sunshine. They feed on a variety of trees and shrubs and may cause damage to fruit trees and nursery stock.

The species lives on grassland, often on poor or calcareous soil, where the larvae feed on a variety of roots and sometimes in large numbers. This beetles are common around Central Europe but can be also found all the way east to Siberia and Mongolia.