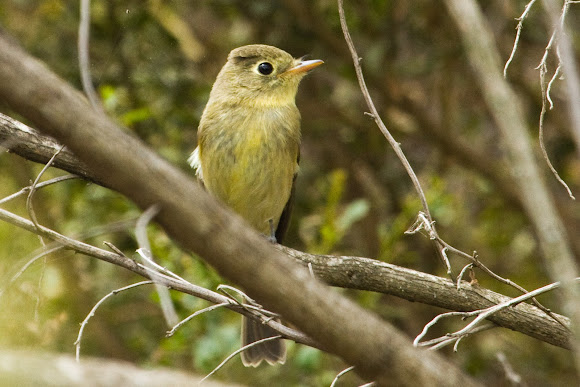 The Pacific-slope Flycatcher (Empidonax difficilis) is a small insectivorous bird of the family Tyrannidae. It is native to coastal regions of western North America, including the Pacific Ocean and the southern Sea of Cortez, as far north as British Columbia and southern Alaska, but is replaced in the inland regions by the Cordilleran Flycatcher. These two species were formerly considered a single species known as Western Flycatcher. In winter, both species migrate south to Mexico, where they are virtually indistinguishable from one another.

The Pacific-slope Flycatcher inhabits either coniferous or deciduous forests. In its range it enters mixed woods, douglas fir forests, redwood forests, and many other wooded environments including Riparian woodlands.

Based on my notes, these show up in early to mid-April in northern California, and late April in Washington. I always look forward to hearing their distinctive calls in early spring.