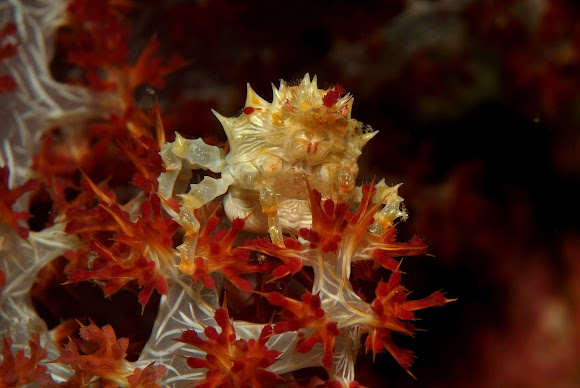 Hoplophrys is a monotypic genus of crab in the family Epialtidae. It contains the single species Hoplophrys oatesi, also known as the candy crab, Oates's soft coral crab, commensal soft coral crab and Dendronephthya crab. Hoplophrys oatesi is a very colourful crab that grows from 1.5 to 2 cm. It lives on various species of soft coral in the Dendronephthya genus. It camouflages itself by mimicing the colours of the polyps among which it hides. It adds further camouflage by attaching polyps to its carapace. Colours vary depending on the colour of the coral, and may be white, pink, yellow or red. The first pair of legs of this species has small claws. The body has pointed spines with a red and white pattern, similar in appearance to the host coral

This one is a Female, carrying Eggs. Pic #2 shows how well they have adapted to camouflage to the Soft Corals. Some Crabs even cut the polyps of the Soft Corals and placed them on its carapace