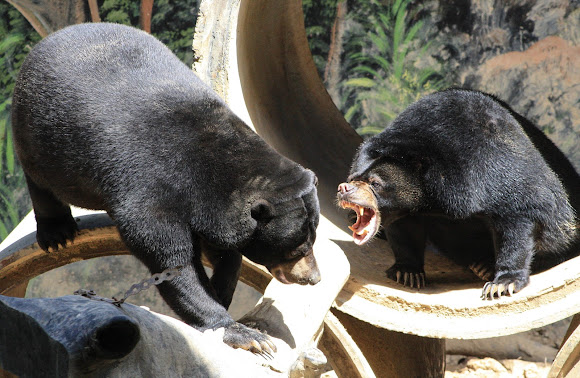 The sun bear's fur is usually jet-black, short and sleek with some under-wool; some individual sun bears are reddish or gray. There are two whirls on the shoulders, from where the hair radiates in all directions. There is a crest on the sides of the neck and a whorl in the centre of the breast patch. There is always a more or less crescent-shaped pale patch on the breast that varies individually in colour ranging from buff, cream or dirty white to ochreous. The skin is naked on the upper lip. The tongue is long and protrusible. The ears are small and round, broad at the base and capable of very little movement. The front legs are somewhat bowed with the paws turned inwards, and the claws are cream.

Spotted at the Lok Kawi Wildlife Park in Sabah Borneo.

I felt incredibly sorry for the bears and all the animals at this wildlife park, it really wasn't up to par. As you can see in the pictures the bears had no natural vegetation bar a bit of grass, the plants were painted on the wall. The enclosures of almost all of the animals were far too small, most had no grass at all & many of the animals had sores on their bodies. There were hand prints on the bears fur which i can only hope were not from being hit.

I have to agree with you, we visited early last year and it was terrible.

It really was a horrible zoo. The only 'vegetation' was that painted on the wall. The snow leopard was in an all dirt enclosure smaller than my bedroom with only a log for enrichment, it was really more of a chook pen, couldnt even see the sky.

Not chain Malcolm but a sharp piece of steel strip.

Yes, Sun Bears, and an unhappy place for them.
Is that a chain I see in the bottom left corner?