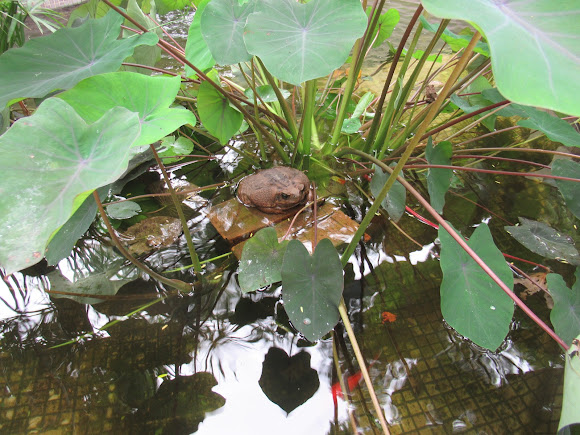 Cane toad also known as the giant neotropical toad or marine toad, is a large, terrestrial true toad native to South and mainland Central America, but which has been introduced to various islands throughout Oceania and the Caribbean, as well as Northern Australia. It is the world's largest toad. It is easily distinguished from its froggy friends by its sheer size. Weighing up to three and a half pounds, the female toads are often larger than the males. ... Not only the largest in Costa Rica, but the cane toad is the largest toad in the world.

During breeding time, male toads migrate to ponds where their famous calls are heard. After some mating performances the male release a cloud of sperm into the water, into which the female releases between 100 and 20’000 eggs. After a few days the eggs hatch and tadpoles emerge. These again develop into toadlets after around 1-2 months, thereafter leaving the water for an existence on land.

This girl was waiting in our pond for a mate.