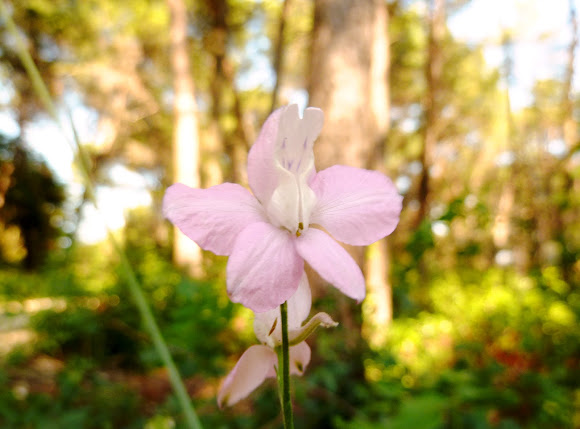 It is an annual flowering plant of the family Ranunculaceae that has been frequently grown in gardens as an ornamental for its spikes of blue [ http://www.projectnoah.org/spottings/314... ], white [ http://www.projectnoah.org/spottings/283... ] or pink flowers like the specimen on the photo. It may reach a meter in height. Each flower is then replaced by a pubescent follicle containing numerous small black seeds. These seeds are small enough to be dispersed by gusts of wind. The root system is a slender branching taproot. This plant spreads by reseeding itself, and may form colonies at favorable sites, although it usually doesn't persist.

Its lovely! Thanks for sharing it :-)

Tnx, wasn't that small though, a bit smaller than a daisy ;) but the plant was actually one of the tallest around (well not that is anything else surviving under the acid from pine trees ;) ) around 35 to 40 cm! True happiness to spot a flower in the forest ;)