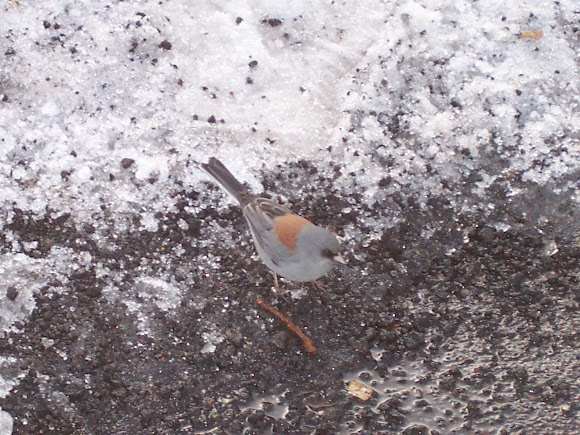 Adults generally have gray heads, necks, and breasts, gray or brown backs and wings, and a white belly, but show a confusing amount of variation in plumage details. The white outer tail feathers flash distinctively in flight and while hopping on the ground. The bill is usually pale pinkish.[2] Males tend to have darker, more conspicuous markings than the females. The Dark-eyed Junco is 13 to 17.5 cm (5.1 to 6.9 in) long and has a wingspan of 18 to 25 cm (7.1 to 9.8 in).[2][3] Body mass can vary from 18 to 30 g (0.63 to 1.1 oz).[2] Among standard measurements, the wing chord is 6.6 to 9.3 cm (2.6 to 3.7 in), the tail is 6.1 to 7.3 cm (2.4 to 2.9 in), the bill is 0.9 to 1.3 cm (0.35 to 0.51 in) and the tarsus is 1.9 to 2.3 cm (0.75 to 0.91 in).[4] Juveniles often have pale streaks and may even be mistaken for Vesper Sparrows (Pooecetes gramineus) until they acquire adult plumage at 2 to 3 months. But junco fledglings' heads are generally quite uniform in color already, and initially their bills still have conspicuous yellowish edges to the gape, remains of the fleshy wattles that guide the parents when they feed the nestlings. The song is a trill similar to the Chipping Sparrow's (Spizella passerina), except that the Red-backed Junco's (see below) song is more complex, similar to that of the Yellow-eyed Junco (Junco phaeonotus). The call also resembles that of the Black-throated blue warblers, which is a member of the New World Warbler family.[5] Calls include tick sounds and very high-pitched tinkling chips

This bird is common across much of temperate North America and in summer ranges far into the Arctic.