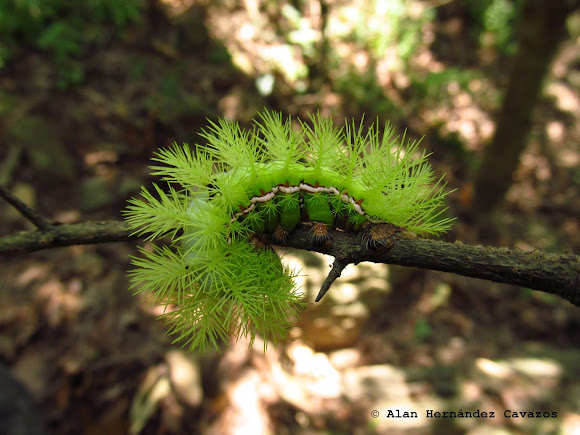 The Io Moth (Automeris io) is a very colorful North American moth in the Saturniidae family. It ranges from the southeast corner of Manitoba and in the southern extremes of Ontario, Quebec, and New Brunswick in Canada, and in the US it is found from Montana, North Dakota, South Dakota, Nebraska, Colorado, New Mexico, Texas, Utah, east of those states and down to the southern end of Florida.

Imagines (sexually mature, reproductive stage) have a wingspan of 2.5-3.5 inches (63–88 mm). This species is sexually dimorphic, males having bright yellow forewings, body, and legs, while females have reddish brown forewings, body, and legs. The males also have much bigger plumose (feathery) antennae than the females. Both have one big black to bluish eyespot with some white in the center, on each hindwing, a defense mechanism meant to frighten off potential predators, especially when the moth is sitting in the head-down position.