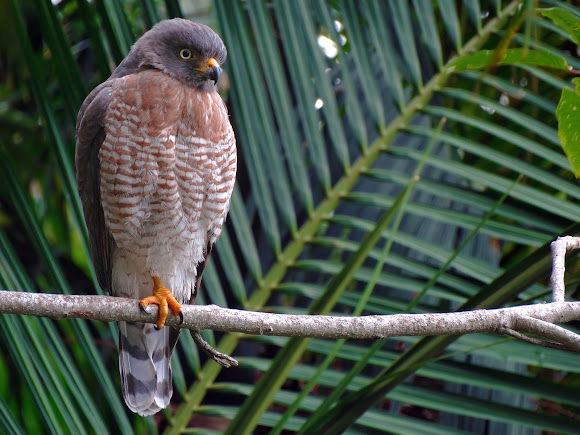 The Roadside Hawk (Rupornis magnirostris) is a relatively small bird of prey found in the Americas. This vocal species is often the most common raptor in its range. It has many subspecies and is now usually placed in the monotypic genus Rupornis instead of Buteo.[2] The Roadside Hawk is 31–41 centimetres (12–16 in) long and weighs 250–300 grams (8.8–11 oz).[3] Males are about 20% smaller than females, but otherwise the sexes are similar.[4] In most subspecies, the lower breast and underparts are barred brown and white, and the tail has four or five grey bars. Twelve subspecies are usually recognised and there is significant plumage variation between these. Depending on the subspecies involved, the Roadside Hawk is mainly brown or grey. It is fairly common to observe a touch of rufous (i.e., a light reddish-brownish coloration) on the bird's wings, specially when it is in flight.[5] Its call is a very high-pitched piercing squeak. The eyes of adult Roadside Hawks are whitish or yellow. As suggested by its specific name (magni = large; rostri = beak), its beak is relatively large.[4] The Roadside Hawk may be marginally the smallest hawk in the widespread genus Buteo, although Ridgway's Hawk and the White-rumped Hawk are scarcely larger.[4] In flight, the relatively long tail and disproportionately short wings of the Roadside Hawk are distinctive. It frequently soars, but does not hover.[4]

The Roadside Hawk is common throughout its range: from Mexico through Central America to most of South America east of the Andes cordillera. It is found from the northern Caribbean coast of South America south to the northeastern parts of Argentina. With the possible exception of dense rainforests, the Roadside Hawk is well adapted to most ecosystems in its range. It is also an urban bird, and is possibly the most common species of hawk seen in various cities throughout its range – or perhaps just the most conspicuous one, as it becomes aggressive when nesting and has been recorded attacking humans passing near the nest.[7]

The Roadside Hawk's diet consists mainly of insects, squamates, and small mammals, such as young Common Marmosets and similar small monkeys which are hunted quite often.[8] It will also take small birds, but far less often than generalists such as the related but larger White-tailed Hawk, or bird specialists like the more distantly related Aplomado Falcon. Mixed-species feeding flocks it encounters when hunting in open cerrado habitat are not particularly wary of it: they watch it lest the hawk come too close, but consider them hardly more of a threat than the diminutive American Kestrel.[9]