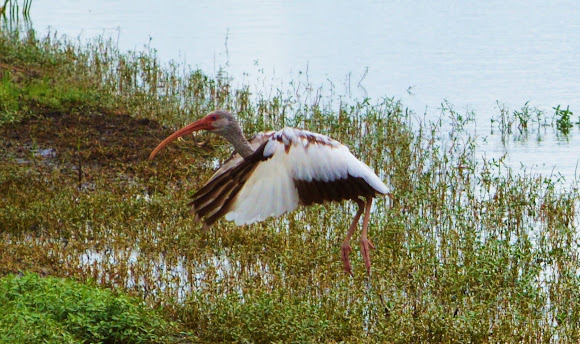 The white plumage and pink facial skin of adult American White Ibises are distinctive. Adults have black wingtips that are usually only visible in flight. In non-breeding condition the long downcurved bill and long legs are bright red-orange. During the first ten days of the breeding season, the skin darkens to a deep pink on the bill and an almost purple-tinted red on the legs. It then fades to a paler pink, and the tip of the bill becomes blackish. It is difficult to determine the sex of an adult American White Ibis from its external appearance, since the sexes have similar plumage. However, there is sexual dimorphism in size and proportion as males are significantly larger and heavier than females and have longer and stouter bills. A study of the American White Ibis in southern Florida yielded weight ranges of 872.9 to 1,261 g (1.924 to 2.78 lb) for males and 592.7 to 861.3 g (1.307 to 1.899 lb) for females, with average weights of 1,036.4 g (2.285 lb) for males and 764.5 g (1.685 lb) for females. The length of adult female and male birds ranges from 53 to 70 cm (21 to 28 in) with a 90 to 105 cm (35 to 41 in) wingspan. Among standard measurements, American White Ibis measure 20.5–31 cm (8.1–12 in) along each wing, have a tail measurement of 9.3–12.2 cm (3.7–4.8 in), a tarsus of 6.75–11.3 cm (2.66–4.4 in) and a culmen of 11–16.9 cm (4.3–6.7 in). The newly hatched American White Ibis is covered with gray down feathers, deepening to dark brown or black on the head and wings. The chest is often bare and there can be a white tuft on the head. The irises are brown. The exposed skin is pinkish initially, apart from the tip of the bill which is dark gray, but turns gray within a few days of hatching. The bill is short and straight at birth and has an egg tooth which falls off between days five and nine, and develops three black rings from around day six, before turning gray by around six weeks of age. The gray to sandy gray brown juvenile plumage appears between weeks two and six, and face and bill become pink a few weeks later, while the legs remain gray. The irises have turned slate-gray by this stage. Once fledged, the juvenile American White Ibis has largely brown plumage and only the rump, underwing and underparts are white. The legs become light orange. As it matures, white feathers begin appearing on the back and it undergoes a gradual molt to obtain the white adult plumage. This is mostly complete by the end of the second year, although some brown feathers persist on the head and neck until the end of the third year. Juvenile birds take around two years to reach adult size and weight. Like other species of ibis, the American White Ibis flies with neck and legs outstretched, often in long loose lines or 'V' formations—a 1986 field study in North Carolina noted over 80% of adult ibis doing so, while juveniles rapidly took up the practice over the course of the summer. The resulting improvement in aerodynamics may lower energy expenditure. These lines fly in an undulating pattern as they alternately flap and glide. Soaring in a circular pattern is also seen. Heights of 500 to 1,000 m (1,600 to 3,300 ft) may be reached as birds glide over flights of 20 km (12 mi) or more. More commonly, birds fly between 60 and 100 m (200–350 ft) above the ground, gliding or flapping at a rate of around 3.3 wingbeats a second. The main call of the American White Ibis is a honking sound, transcribed as urnk, urnk, or hunk, hunk. The call is used in flight, courtship or when disturbed. Birds also utter a muted huu-huu-huu call while foraging, and make a squealing call in courtship. Young in the nest give a high-pitched zziu as a begging call.

The American White Ibis is found in a variety of habitats, although shallow coastal marshes, wetlands and mangrove swamps are preferred. It is also commonly found in muddy pools, on mudflats and even wet lawns. Populations that are away from the coast and shoreline, particularly in southern Florida, often reside in other forms of wetlands such as marshes, ponds and flooded fields. In summer, these move to more coastal and estuarine habitats as inland waterways become flooded with summer rains and the ibis find the water levels too deep to forage effectively.