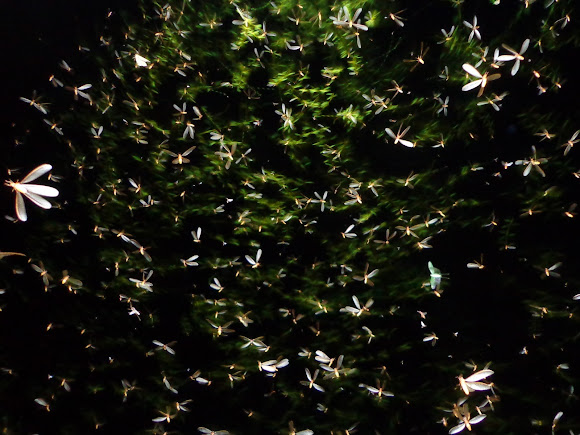 New kings and queens can fly. New reproductive termites are winged. These young kings and queens are called alates. In areas with a distinct dry season, the alates leave the nest in large swarms after the first soaking rain of the rainy season. The actual "take off" from the parent colony is also often synchronized to overwhelm their predators. In other regions, flights may occur throughout the year, or more commonly, in the spring and autumn. Termites are relatively poor fliers and are readily blown downwind in wind speeds of less than 2 km/h, shedding their wings soon after landing at an acceptable site, where they mate and attempt to form a nest in damp timber or earth. After wings are shed, the queens often try to escape the males, allowing only the fastest and the fittest males to mate. This is the most interesting part- the chase, because most of the fallen termites is seen right behind the heel of the other. One queen will usually mate with several males. The whole event is termed 'nuptial flight'. http://en.wikipedia.org/wiki/Nuptial_fli... Winged termites are proteinous and are eaten in Nigeria. They are often captured on the wing, de-winged then salted and probably fried or boiled. I'm still yet to give it a try :)

Great series & info!
I've removed this from the "Flies" mission as that is for true flies (members of the order Diptera) only.