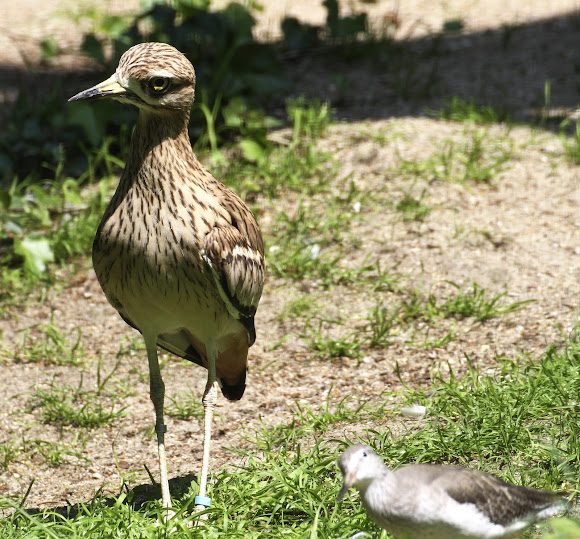 The Stone Curlew, Eurasian Thick-knee, or Eurasian Stone-curlew (Burhinus oedicnemus) is a northern species of the Burhinidae (stone-curlew) bird family. It is a fairly large wader though is mid-sized by the standards of its family. Length ranges from 38 to 46 cm (15 to 18 in), wingspan from 76 to 88 cm (30 to 35 in) and weight from 290 to 535 g (10 to 18.9 oz) with a strong yellow and black beak, large yellow eyes (which give it a "reptilian", or "goggle-eyed" appearance), and cryptic plumage. The bird is striking in flight, with black and white wing markings. Despite being classed as a wader, this species prefers dry open habitats with some bare ground. It is largely nocturnal, particularly when singing its loud wailing songs, which are reminiscent of that of curlews. Food consists of insects and other small invertebrates, and occasionally small reptiles, frogs and rodents. It lays 2-3 eggs in a narrow scrape in the ground. The stone curlew occurs throughout Europe, north Africa and southwestern Asia. It is a summer migrant in the more temperate European and Asian parts of its range, wintering in Africa.

I love how the two birds stare at each other.. ;) Photographed in the Bird Park of Walsrode, Germany.

He looks pissed off and cute in the same time :) Nice capture and thanks for the information about the bird!