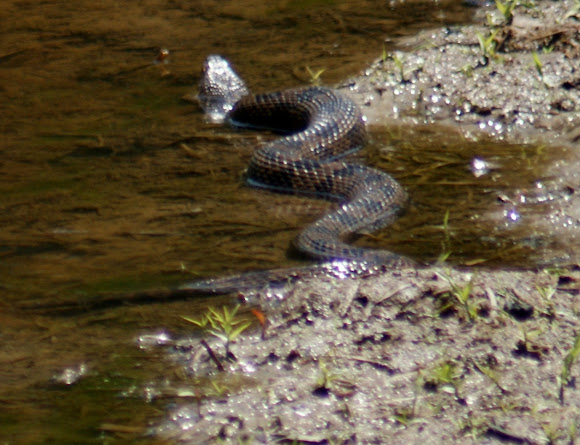 The brown water snake is a nonvenomous snake that is often confused with the venomous Eastern Cottonmouth. It is very heavy-bodied, and its neck is distinctly narrower than its head. Dorsally it is brown or rusty brown with a row of about 25 black or dark brown square blotches down its back. Smaller similar blotches alternate on the sides. Ventrally it is yellow heavily marked with black or dark brown. Dorsal scales are in 27-33 rows (more than any other North American water snake), and it has 2-4 anterior temporals (usually 1 in others). Adults measure 30-60 in. (76–152 cm) in total length; record 69 in.

It is found in lower coastal regions from southeastern Virginia, through North Carolina, South Carolina, and Georgia, to northern and western Florida (Gulf Coast), then west through Alabama and Mississippi, to Louisiana, normally from sea level to 500 ft. It is found in swamps and streams. This one was photographed in Butler Creek at the Phinizy Swamp Nature Park in Richmond County, GA .

Nerodia taxispilota is ovoviviparous. Mating takes place in the spring on land or on tree branches. On average adult females are larger than adult males. The young are born alive, usually in August, in broods of 14-58, more commonly 30-40. The newborns are 7-10¾ in. (18–27 cm) long, with males longer than females, opposite of adults.