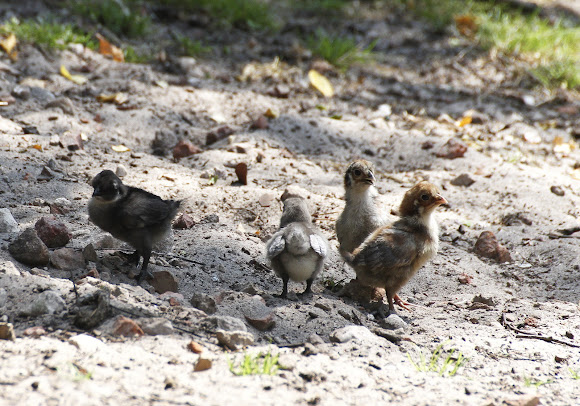 The chicken (Gallus gallus domesticus) is a domesticated fowl, a subspecies of the Red Junglefowl. As one of the most common and widespread domestic animals with a population of more than 24 billion in 2003, there are more chickens in the world than any other species of bird. Humans keep chickens primarily as a source of food, consuming both their meat and their eggs.

Photographed in the Bird Park of Walsrode, Germany. The mother was in the Pen of the Emus with her chicks and was aggressively chasing the two Emus around, when they came too close to the chicks.. i have never seen such an aggressive motherbird.. In the second picture she is just getting ready to chase the Emus again..

Yes of course she must have but they are not turkey. Sometimes people put hen eggs to turkey because they are big and can incubate a lot more eggs than a chicken. So you should just change the spotting to hen chicks :)

But she must have raised them, as aggressive as she was, and they were following her all the time.. ;)

Nice spotting but those are chicken chicks not turkey juveniles :).