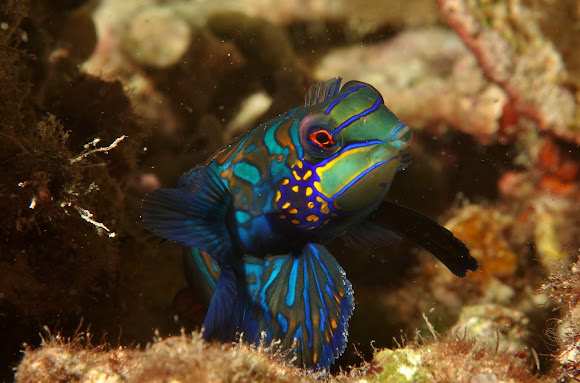 The mandarinfish or mandarin dragonet (Synchiropus splendidus), is a small, brightly colored member of the dragonet family. The common name of the mandarinfish comes from its extremely vivid colouration, evoking the robes of an Imperial Chinese mandarin.

The mandarinfish is native to the Pacific, ranging approximately from the Ryukyu Islands south to Australia. Mostly found in the shallows, among stag horn corals or coral rubble. They tend to stay in one area, hence once found/discovered, can be easily be located again.

The Mandarinfishes have a very interesting behavior; they mate everyday at sunset! Most Divers who wants to look for Mandarin Fish will have to do a Sunset Dive for a better chance to find them. They can also be found at other time of the day, but can be very shy and hides easily. At sunset, the Males (bigger than the Females), will roam his area/territory looking for willing Females. Once a willing Female is located, they will court for a while before the final act of mating, which is quite a sight, it will float 6-10 inches to the water column side by side (Pic #2, #3 and #4), the Female will release her Eggs in a cloud for the Male to fertilize. This happens within seconds after which, they quickly swim down to the stag horn corals. The Male will then continue to look for other willing Females.

Glad to share with the Group the wonderful marine life :)

What a beautiful fish! Congratulations!

Awesome capture Albert,you have a astonish spotting page,great spotting,congrats aon the SOTD and thanks for sharing

Congratulation on the SOTD, Albert. Thank you for sharing another of your gorgeous under the sea spotting's.

Thanks, @Sckel, I dive, a lot :) and enjoy taking pictures and videos of marine life, especially with behaviors. It is much easier to take decent underwater photos and videos nowadays as compact cameras are more affordable now.

Thanks, @Tom15. Lots of divers would spend 30 minutes or more to watch this daily ritual and try to capture the encounters :)

Thanks, @dan and I am sure you would love to be dandy as the mandarinfish ;)

Actually, a dive to watch the Mandarin fish is like going to the red light area :D, this dandy guys are very shy with the bright lights since it is already sunset to night dive, so, serious photographers have to use red light setting on their torch or add a red filter to their torchlight, so that the Mandarin fish can go on with their mating rituals without being disturbed :D

Congrats again Albert. What I wouldn't give to be this fish! Hahaha!

Congrats on another well deserved SOTD! This is an extraordinary series of beautiful shots showing the mating behavior.

wonderful spotting. congratulations. you have a lot of beautiful spotting of the sea. how do you make the pictures?

Thanks, @Yasser for selecting this as Spotting of the Day.
Am happy to share and learn at the same time :)