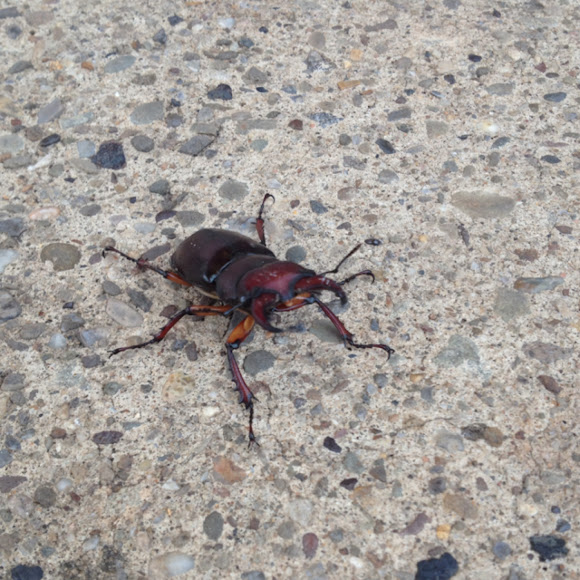 A relatively large lucanid beetle of the genus Lucanus, with male having long, curved upper jaws, resembling a sickle. The larvae are found in the trunks of old trees, feeding on the inner wood. Dark reddish brown with smooth, shiny elytra; femora orange-brown. Males have much larger jaws than females. Jaws of male not as large as those of Lucanus elaphus. The smaller L. placidus has two or more teeth on jaws and has the femora dark. Size: 22-35 mm Was originally described by Linnaeus as Scarabaeus capreolus in 1763. (orig. comb.). Other known synonymies are:[3] L. dama Fabricius 1775: 2. L. trigonus Thunberg, 1806: 199. L. muticus Thunberg, 1806: 205. As with most of the species of the Lucanidae, there is a pronounced sex dimorphism, and the male of Lucanus capreolus is larger than the female and armed with the antennae in the form of antlers.

It lives in deciduous forests and adjacent areas[4]in the Eastern United States and some parts of Canada. Could be found around decaying logs and stumps, where it breeds. Males use mandibles to fight at breeding sites. Eggs are deposited in rotting wood. Larvae live in decaying wood of deciduous trees. It is reported that larvae take two years to develop, and pupate in nearby soil. Attracted to lights at night.[4]