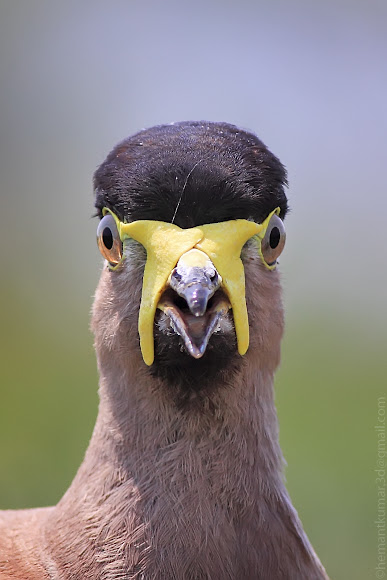 These are conspicuous and unmistakable birds found in dry stony and open grassland or scrub habitats. They are medium-sized pale brown waders with a black crown which is separated from the brown on the neck by a narrow white band and large yellow facial wattles. The chin and throat are black and the brown neck and upper breast is separated from the white belly by a narrow blackish line. The tail has a subterminal black band which does not extend into the outer tail-feathers. There is a white wingbar on the inner half of the wing. The bill is yellow at the base. They have tiny yellow carpal spurs. The crown feathers can be raised slightly in displays. They are mostly sedentary but populations make long distance movements in response to the monsoons. They are occasional visitors to the Katmandu valley in Nepal. There are no recognized subspecies, but there is a size increase from south to north. They are 260-280mm long with a wing of 192-211mm, bill 23-26mm, tarsus 57-66mm and tail 71-84mm. Juveniles have a brown crown and the sexes are alike but males have slightly longer wings and tarsi. The call is a sharp tchee-it call. Local names include Zirdi in Hindi, Chitawa in Telugu and Jithiri in Rajasthan and Pakistan, Pili tatihri in Punjabi, Laori in Madhya Pradesh, Parasna titodi or Vagdau titodi in Gujarati, Pitmukhi titvi in Marathi, Manjakanni in Malayalam, Haladi tittibha in Kannada, Aalkati in Tamil and Kiraluwa in Sinhalese.(wiki)

last photograph is a juvenile

Congratulations Hermant on your SOTD

Great series Hemant! The beak of the bird is truly wonderful!! =)

Thank you so much Yasser n project Noah :)

Hemant, congratulations, this great series was selected as Spotting of the Day! The first photo was just too eye-catching to ignore and it almost looks like the bird was surprised to be photographed. It's great and thanks again for all your awesome contributions. Congrats!

What a great portrait! It's almost having a conversation with the photographer.