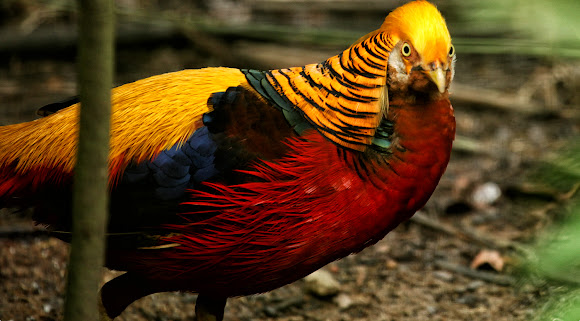 The Golden Pheasant or "Chinese Pheasant" is a gamebird of the order Galliformes (gallinaceous birds) and the family Phasianidae. It is native to forests in mountainous areas of western China, but feral populations have been established in the United Kingdom and elsewhere. In England they may be found in East Anglia in the dense forest landscape of the Breckland. The adult male is 90–105 cm in length, its tail accounting for two-thirds of the total length. It is unmistakable with its golden crest and rump and bright red body. The deep orange "cape" can be spread in display, appearing as an alternating black and orange fan that covers all of the face except its bright yellow eye with a pinpoint black pupil.