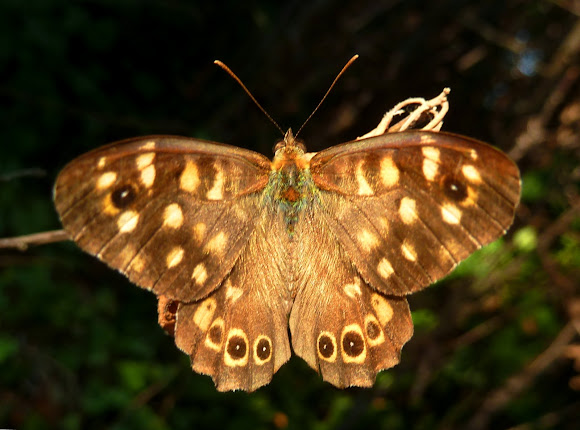 Females have brighter and more distinct markings than males. The wingspan of both males and females is 4 - 4.5 cm, although males tend to be slightly smaller than females. Males are highly territorial and will defend their territory against intruding males. Two basic strategies exist for finding females: some males will vigorously defend a perch and the immediate surroundings, waiting for females to pass by; others will patrol a larger territory. Males have either 3 or 4 upper hindwing eyespots; the fourth spot shows only in flight. It appears that the 4-spotted morph tends towards patrolling behaviour to finds mates.

It found in and on the borders of woodland throughout much of the Palearctic ecozone. In North Europe, Central Europe, Asia Minor, Syria, Russia and Central Asia where subspecies tircis occurs it is brown with pale yellow or cream spots and darker upper wing eye spots. In southwestern Europe and North Africa the subspecies aegeria has a color which is more orange in the background; the hindwing underside eye spots are reddish brown rather than black or dark gray. The two forms gradually intergrade into each other. The speckled wood also occurs on the Atlantic island of Madeira. It occupies a diversity of grassy, flowery habitats in forest, meadow steppe, forest, woods, glades, alongside hedges and and in wooded urban parks. It is found up to 1500 m above sea level.