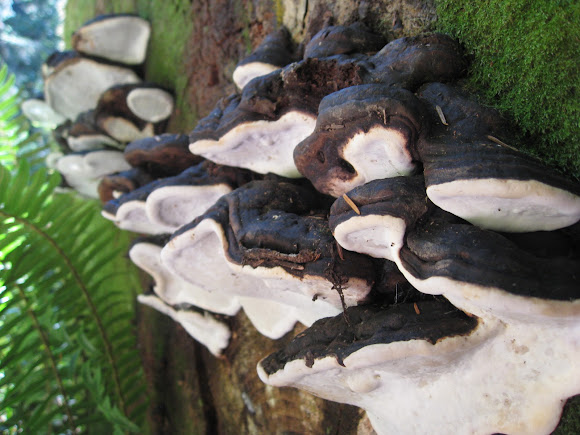 Bracket-type mushroom that is common all over North America and the rest of the world. It is a wood-decay fungus that sometimes acts as a parasite on live wood, but prefers dead wood, found on most species of hardwoods and conifers. It is brown on top, with a white waxy coating over it's pore surface. It gets it's name "artist's bracket" from the fact that when damaged, the white surface turns brown making it possible to draw on the undersides (please don't though, take a picture instead). It is a perennial mushroom - the conks can survive for up to 50 years, adding a new ring around the outside of the fruiting body each year and can become very large. The cap is fan-shaped or semi circular.

Artist's bracket is found all over the world, but is especially common in North America. It grows on dead hardwood or conifers, rarely growing as a parasite on live wood. Look for it on the ends of cut logs, growing on fallen trees or logs, and growing in wounds on hardwoods and conifers.

Photos taken on the Hoh River Trail in the Olympic National Forest.