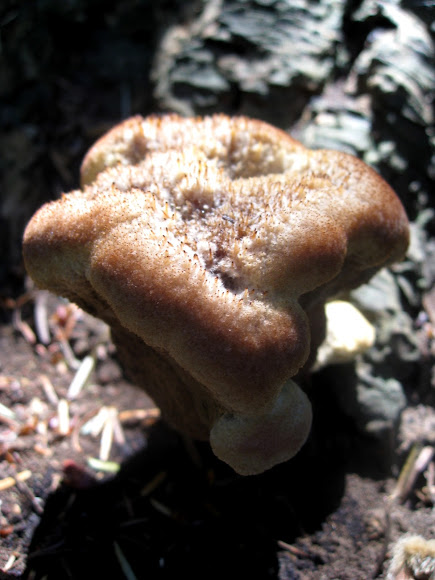 Phaeolus Schweinitzii is a parasitic fungus that grows on the roots or lower portions of conifers causing buttrot in the tree. It is native to North America and the fruiting bodies normally appear between June and November. It is an annual, so it will make an appearance yearly. This specimen appears to be terrestrial, but it is actually growing from the roots of a nearby host tree. When it is young it will appear spongy and yellow, and as it gets older it will loose the fuzzy-top and become darker brown and harden to a more wood-like texture. Sometimes twigs or other debris from the forest floor will be incorporated into the fruiting body as it grows. Velvet-top fungus is not edible. As the other nickname, dyer's polypore, suggests, it has been traditionally used to make yellow, green and brown dyes.

Phaeolus schweinitzii is a fungal plant pathogen that causes butt rot on conifers such as Douglas-fir, spruce, fir, hemlock, pine, and larch. It can sometimes appear to be terrestrial when it is growing on the roots of a nearby host tree. Look for it on the forest floor near conifers, or on the lower portions of trees.