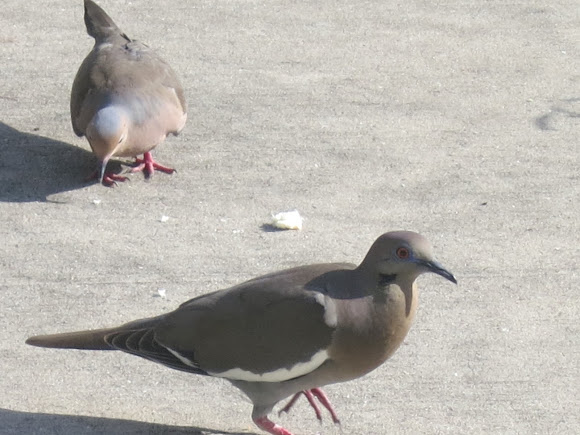 White wing dove has a orange eyes and blue eyes shadow. They have a brown body and a black streak in their cheeks. One of their unique appearance is the white stripe on the edge of their wing. Which give them this common name.

They usually found in desert habitat in the Southwest and suburbs of Texas, in cities, the coastal Southeast and backyard.

They can swallow water without moving their heads and they use a secretion from the esophagus, known as crop milk, to feed nestlings. Both parents may consume snails and bone fragments to help their bodies create the nutritious fluid.Although the White-winged Dove is mostly resident in the Southwest, it is expanding its range, and individuals can be found far afield. White-winged Doves have been seen from Alaska to Ontario, Maine, Newfoundland. It usually eats fruits and large seeds from plants like panic grass, spurge,bristle grass, Chinese tallow, lime prickly-ash, Mexican jumping beans,leather weed, brasil, privet, ocotillo, pigeon berry, and saguaro. White-winged Doves may eat snails and bone fragments as a source of calcium. They also consume small stones to help pulverize plant material in their gizzards.