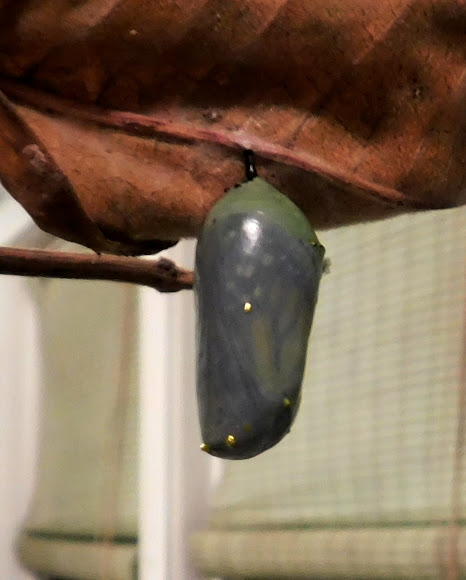 Yesterday, both pale green Monarch chrysalis (pupa) appeared blackish (actually crystal). Inside I could see the Monarch wings take shape: orange and veined with black. One chrysalis split open and the butterfly very quickly crawled out. The second one was not ready. That evening, I brought the big jar upstairs to watch her break out of the chrysalis. She came out about 8 PM. The butterfly held onto the chrysalis while it dried its wings. At first the wings were crumpled up. Little by little the new Monarch's wings expanded and dried out. I brought jar with the butterfly downstairs, took her out, and put her on the porch flowers leaving the windows open. Next morning it was pouring rain outside. I looked on the flowers and she was still on them - safe from the rain. When it stopped raining she flitted out the window to be with her sister. Soon both (named Martha and Doreen) would head for California or Mexico. Note: males have a black dot (scent patch) on each of the fifth vein of the hind wing.

We had many Monarch this year. I agree SulkanyaDatta. Godspeed.