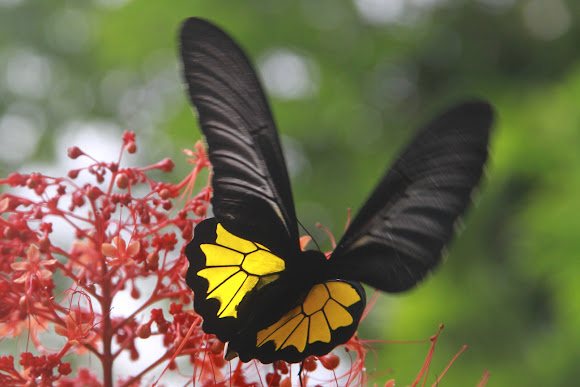 The Southern Birdwing (Troides minos) is a large and striking Swallowtail butterfly endemic to Peninsular India. With a wingspan of 140–190 mm, it is the largest butterfly found in southern India. It was earlier considered a subspecies of the Common Birdwing (Troides helena) but is now recognised as a valid species. (https://en.wikipedia.org/wiki/Troides_mi...) The species is more common in the Western Ghats, which is a biodiversity hotspot with a high degree of endemism in many taxa. It is much sought after by collectors and is a highlight of many butterfly-tours in the Western Ghats.

They are the largest butterflies of India. It is sitting on a Pagoda Flower (Clerodendrum paniculatum)

Thank you, Gilma Jeannette Ospino Ferreira-Norman. I have added some information from Wikipedia.

Lovely Butterfly and great series, VincentVanur, just love that beauty, could you tell us a little bit more? like what size?

Love the photos and the subject!