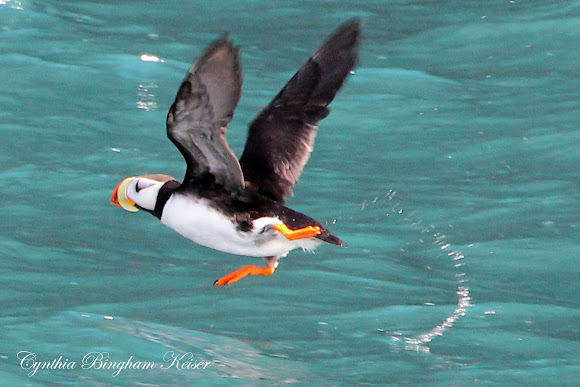 This is one of the most comical yet enduring birds I've ever seen. This series is of one taking flight. It had almost as much trouble getting into the air as a Coot. We were warned to watch for these birds since there have been many people hit by flying Puffins while in a boat. We're told it is like someone throwing a potato at you very hard. "The yellow bill plate grows before the breeding season and is shed later. They have a small fleshy black "horn" above their eyes. They have a white face with a dark line extending from the back of the eye and red feet."

Near Gull Island in Resurrection Bay. "This species breeds on rocky islands off the coasts of Siberia, Alaska and British Columbia, in burrows, in rocky cavities or among rocks. It winters far out to sea."

I do too, Rieko! Thank you, EnvUnlimited.

Thank you Marta, LandmarkExpert and Carol! I was so excited to see that the photo's turned out despite holding a telephoto by hand... on a boat :)

Precious spotting in flight! Is also a different species from the ones I saw in Shetlands..excellent!

lovely!! I missed seeing so many things!