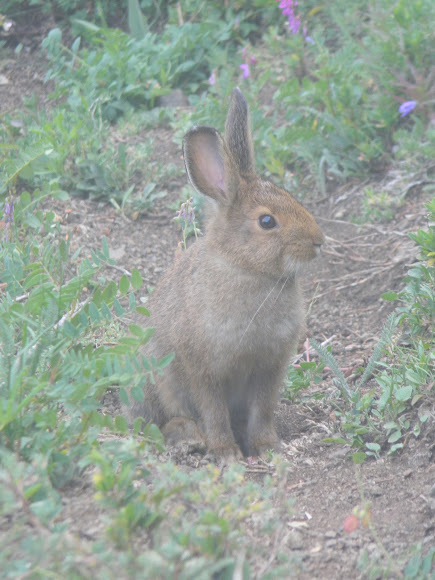 The snowshoe hare (Lepus americanus) is a species of hare found in North America. It has the name "snowshoe" because of the large size of its hind feet and the marks its tail leaves. The animal's feet prevent it from sinking into the snow when it hops and walks. Its feet also have fur on the soles to protect it from freezing temperatures. For camouflage, its fur turns white during the winter and rusty brown during the summer. Its flanks are white year-round. The snowshoe hare is also distinguishable by the black tufts of fur on the edge of its ears. Its ears are shorter than those of most other hares.

In western Washington, most unburned, burned, or scarified clearcuts will normally be fully occupied by snowshoe hares within four to five years, as vegetation becomes dense. In older stands (more than 25 years), stem density begins to decline and cover for snowshoe hares decreases.

Spotted on the Mt. Townsend Trail in the Olympic National Forest, WA (Western Washington). Sorry for the fuzzy photos! It was very foggy that day.

Great sighting!
Thanks for stopping by my photo gallery, much appreciated.

I stay away from subspecies, they complicate everything haha. And yea that would be awesome to see them in the winter!! Glad to help :)

Thank you AshleyT for your suggestion! I think you are correct. I got so excited as I read that their color changes to white in winter! I'd love to see them in snow white. :-) It looks like there are four sub-species that live in Washington - L. a. cascadensis (Nelson), L. a. columbiensis (Rhoads), L. a. pineus (Dalquest) and L. a. washingtonii (Baird). Suggestions anybody?

There isn't enough white on this rabbit to be a Cottontail. The summer version of the Snowshoe Hare fits this guy perfectly :)