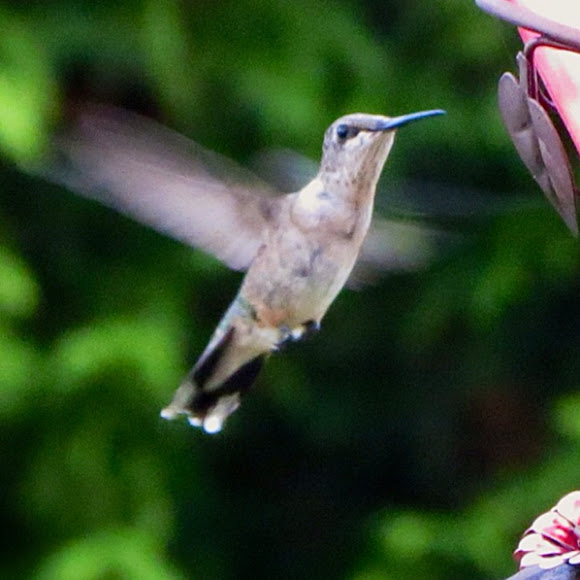 (Wikipedia) The Ruby-throated Hummingbird is the smallest bird species that breeds in the Eastern United States and Eastern Canada, though is a roughly medium-sized species by hummingbird standards. This hummingbird is from 7 to 9 cm (2.8 to 3.5 in) long and has a 8 to 11 cm (3.1 to 4.3 in) wingspan. Weight can range from 2 to 6 g (0.071 to 0.21 oz), with males averaging 3.4 g (0.12 oz) against the slightly larger female which averages 3.8 g (0.13 oz).[3][4] Adults are metallic green above and greyish white below, with near-black wings. Their bill, at up to 2 cm (0.79 in), is long, straight and very slender. As in all hummingbirds, the toes and feet of this species are quite small, with a middle toe of around 0.6 cm (0.24 in) and a tarsus of approximately 0.4 cm (0.16 in). The Ruby-throated Hummingbird can only shuffle if it wants to move along a branch, though it can scratch its head and neck with its feet.[5][6] The species is sexually dimorphic.[7] The adult male, shown in the photo, has a ruby red throat patch (also known as a gorget) which may appear black in some lighting, and a dark forked tail. The female has a dark rounded tail with white tips and generally no throat patch, though she may sometimes have a light or whitish throat patch. The male is smaller than the female, and has a slightly shorter beak. A molt of feathers occurs once a year, and begins during the autumn migration.

(Wikipedia) The breeding habitat is throughout most of eastern North America and the Canadian prairies, in deciduous and pine forests and forest edges, orchards, and gardens. The female builds a nest in a protected location in a shrub or a tree. Of all North American hummingbirds, this species has the largest breeding range.[5] The Ruby-Throated Hummingbird is migratory, spending most of the winter in southern Mexico, Central America as far south as South America[citation needed], and the West Indies. It breeds throughout the eastern United States, east of the 100th meridian, and in southern Canada in eastern and mixed deciduous forest.[8] In winter, it is seen mostly in Mexico.