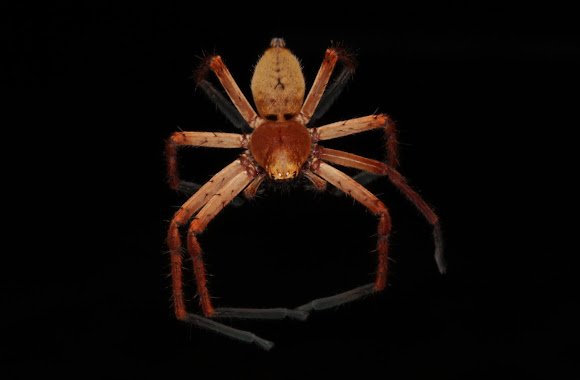 Sparassidae are eight-eyed spiders. The eyes appear in two largely forward-facing rows of four on the anterior aspect of the prosoma. Many species grow very large. Persons unfamiliar with spider taxonomy commonly confuse large species with tarantulas, but huntsman spiders can generally be identified by their legs, which, rather than being jointed vertically relative to the body, are twisted in such a way that in some attitudes the legs extend forward in a crab-like fashion.

Like practically all spiders apart from the Uloboridae and some Liphistiidae and Holarchaeidae, Sparassidae use venom to immobilise prey and to assist in digestion. They have been known to inflict defensive bites, but are not widely regarded as dangerous to healthy humans. Huntsman spiders are widely considered beneficial because they feed on insect pests such as cockroaches.

I hope you can get your camera fixed soon :-)

Not so fine Satyen, :(
My camera is not working so nothing to share with PN but after a long time enjoying the wonderful spotting among community, glad to be here,,

Thanks Atul, I was pretty sure that it might be a Tarantula ;-)

Thank you Sachin! Seeing you after a long time on Project Noah. Hope everything is fine?