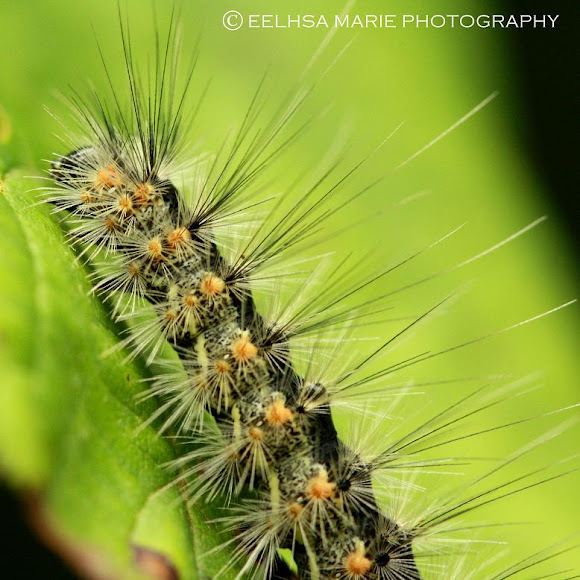 This caterpillar is well known for the cocoon-like "nests" it creates on the leaves and tree branches of various hardwood trees in late summer and autumn. It is not considered a threat to the trees it lives on, but rather simply an annoyance because of the unsightliness of the nests. These moths produce one generation per year in northern parts of North America, and the larvae appear in late summer to early fall. Farther south there are often two or more generations produced per year. The caterpillars of the Fall Webworm Moth can vary in colour; they can be pale yellow to dark grey. There are two races, one that occurs more commonly in the north and one in the south. (these two races have different head colours) Although often confused with Tent Caterpillars, Webworms have much messier "nests" than Tent Caterpillars, and whereas Webworm Larvae appear in late summer and early fall, Tent Caterpillars only appear in Spring and have much shorter hairs. The larval stage of the Webworm lasts from 4 to 6 weeks during which time they eat extensively, in some cases almost completely defoliating host trees. The trees these caterpillars feed on differs greatly depending on location. Some common leaves they feed on in North America include: Elm, Hickory, Fruit trees, Maple, Willow, Cottonwood, and Alder.

This species is Native to North America and is found from Canada, south to Mexico. It is one of the few insects that are considered pests to be introduced from North America to other continents.

I observed a number of these caterpillars on Alder trees. It was quite easy to spot where they were due to the webbing on the trees leaves. I noticed that there were several different sizes living in one "nest", and that they had made quite a mess in the webbing over the time they had lived there. I also observed a couple caterpillars that had left the nests and were by themselves on other plants.