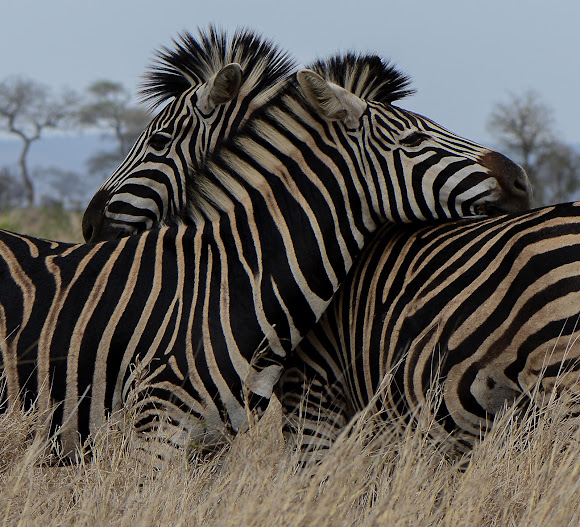 Burchell's zebra is a southern subspecies of the plains zebra. They were really calm and playful, and this my best moment that day!

Nest to the road in Kruger National Park. Zebras are found in most biomes there.

It was previously believed that zebras were white animals with black stripes, since some zebras have white underbellies. Embryological evidence, however, shows that the animal's background color is black and the white stripes and bellies are additions. The stripes are typically vertical on the head, neck, forequarters, and main body, with horizontal stripes at the rear and on the legs of the animal. The "zebra crossing" is named after the zebra's black and white stripes. A wide variety of hypotheses have been proposed to account for the evolution of the striking stripes of zebras. The more traditional of these relate to camouflage. The vertical striping may help the zebra hide in grass by disrupting its outline. In addition, even at moderate distances, the striking striping merges to an apparent grey. The stripes may help to confuse predators by motion dazzle—a group of zebras standing or moving close together may appear as one large mass of flickering stripes, making it more difficult for the lion to pick out a target. The stripes may serve as visual cues and identification. Although the striping pattern is unique to each individual, it is not known whether zebras can recognize one another by their stripes. Experiments by different researchers indicate that the stripes are effective in attracting fewer flies, including blood-sucking tsetse flies and tabanid horseflies. A 2012 experiment in Hungary showed that zebra-striped models were nearly minimally attractive to tabanid horseflies. These flies are attracted to linearly polarized light, and the study showed that black and white stripes disrupt the attractive pattern. Further, attractiveness increases with stripe width, so the relatively narrow stripes of the three living species of zebras should be unattractive to horseflies. (wikipdia)

Thank you Mary, Mona and Mcaul and Start3! I really appreciate your comments!!! :)

These are awesome pictures.

Thank you Riekos for your comment :)) And KarenL, thank you for publishing the facts :) I sometimes feel a bit sorry for all people that goes to game parks and chase the big five. Nothing else matters for some of them...They miss out on a lot of fantastic moments! But luckily PN is a forum for the small and big wonders in nature :)

Fun fact! A zebra’s stripes are unique, much like a human fingerprint, and no two animals have the same pattern. But just why did zebra evolve this trait? Surely having such a dramatic pattern makes them stand out and puts them at greater risk from predators? Not so according to biologists, a zebra’s stripes are actually a form of camouflage known as “motion dazzle”; when a herd of zebras move together, their stripes have the effect of blurring the boundaries between each individual so that they appear to be one large animal running. This is believed to confuse would-be predators and make it more difficult for to pick out a single animal to attack, improving their chances of survival. https://www.facebook.com/photo.php?fbid=...

Dinito, thank you for your great words, and Joshua, your word made me speechless... A very humble thanks...

These are incredible. I think that last one really is Nat Geo quality. congratulations :)

Thank you Martin! It was a fantastic moment as well :)