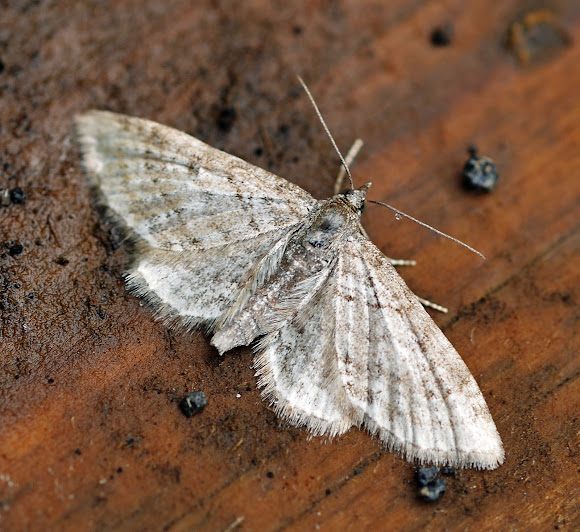 Eupithecia is a large genus of moths of the family Geometridae. There are hundreds of described species, found in all parts of the world. Eupithecia species form the bulk of the group commonly known as pugs. They are generally small with muted colours, and specific identification can be difficult as is the case here. As a group they are identified by their narrow wings held flat at 90° to the body, with the hindwings almost hidden behind the forewings.

bayucca, the pinned collection I photographed nearby has all 4 E. nanata, pusillata, plumbeolata and satyrata, exactly! Based in your own comments and the specimen in the collection (not in very good condition) I am unable to say which one this might be :-(

Thanks Suzanne, and thanks bayucca for your detailed help. I have photographed a collection of moths at a nearby national park, and will go through these to see if I can narrow it further

I am pretty sure it is a Geometridae, Larentiinae and almost sure Eupethicinii. Looks like being a Pug Moth, Eupithecia sp.. There are records of Nanata, Plumbeolata, Pusillata and Satyrata. As you remember from your previous moth I IDed, which was a completely different looking subspecies I am not sure which one it is. None of the mentioned seems in my eyes to be a reasonable match. However, your specimen is not easy to judge, due to the not very strong visible markings.

Arga-warga ... all these small, tan moths give me fits. I've got a small, tan mystery moth in my collection, too. I'll keep an eye out. :-)