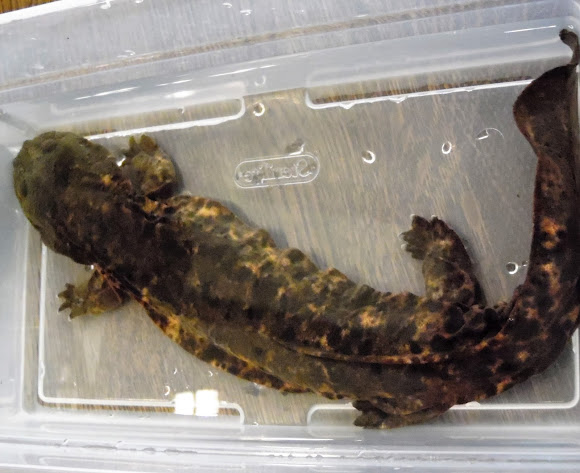 Largest Salamander in North America, Hellbenders grow an average of 2 1/2 feet. They have long, wide, flat bodies with mottled skin covered in mucus and is wrinkled, especially along the sides, Their legs are short and toes, 4 on the front, 5 on the back, are stubby and often have pink or cream tips. Hellbender eyes are tiny and their mouths are large. They are often mistaken for Mudpuppies.

Clean, fresh, running water of the Alleghenies and their foothills. There is a subspecies or related species of Hellbender in the Ozarks

This is one of two Hellbnders at the Roger Tory Peterson Institute who were part of a mostly failed reintroduction program attempted by the Buffalo Zoo and the Haudenosaunee of NY. Most who were released where killed by a disease, most likely Chytridiomycosis. The two at RTPI, Oneka and Tweeg, are being used to educate the public on the local wildlife and taking care of our water.

Hello Sally9 and Welcome to the Project Noah community!
We hope you like the website as much as we do. There are many aspects to the site and community. The best way to get started is to read the FAQs at http://www.projectnoah.org/faq where you can find all the tips, advice and "rules" of Project Noah. You, like the rest of the community, will be able to suggest IDs for species that you know (but that have not been identified), and make useful or encouraging comments on other users' spottings (and they on yours).
There are also "missions" you can join and add spottings to. See http://www.projectnoah.org/missions . A mission you should join is the http://www.projectnoah.org/missions/2165... to chose the best wild photo of 2018,only the spottings added to that mission are eligible.Note that most missions are "local". Be sure not to add a spotting to a mission that was outside of mission boundaries or theme :) Each mission has a map you may consult showing its range. We also maintain a blog archive http://blog.projectnoah.org/ where we have posted previous articles from specialists from different geographical areas and categories of spottings, as well as wildlife "adventures".
So enjoy yourself, share, communicate, learn. See you around :)