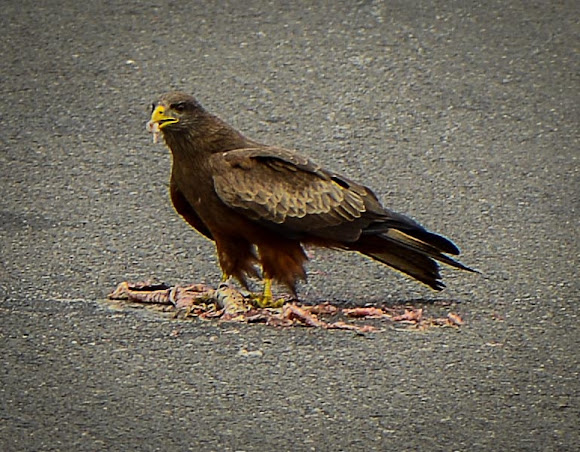 This bird was feeding on the remainings of a "road kill" Puff-Adder. The Yellow-billed Kite is the Afrotropic counterpart of the Black Kite. The Milvus aegyptius parasitus is found throughout most of sub-Saharan Africa (including Madagascar), except for the Congo Basin (with intra-African migrations)

Road EN1, Mozambique. This bird is quite common alongside big roads and close to settlements in the South and middle part of Mozambique.

This species is extremely opportunistic in its feeding habits, and the diet includes small vertebrates, insects (including winged termites), carrion, offal, and dead or dying fish. These kites may pirate prey from other bird species, feed on road kills and village dumps, and attend brushfires and grassland fires, sometimes in large congregations. They spend much of their time in low, searching flight, taking prey in flight, or from the ground. As suggested by its name, the Yellow-billed Kite is easily recognized by its entirely yellow bill, unlike that of the Black Kite (which is present in Africa as a visitor during the North Hemisphere winter). However, immature Yellow-billed Kites resemble the corresponding age of the Black Kite. Orta (1994) and Stresemann and Amadon (1979) maintained the yellow-billed African breeding populations, aegyptius and parasitus (including tenebrosus) as subspecies of M. migrans, although other recent authors have treated them as a single separate species. Based on molecular studies of mitochondrial genes, Johnson et al. (2005) recently confirmed that at least the resident populations from South Africa and Madagascar should be regarded as a separate species, M. parasitus Occurs in a wide variety of habitats, including open areas in general, urban areas, arid habitats, degraded forest, and openings in woodland, often near water, but avoiding dense forest habitats. It is more common in higher rainfall areas, and rural areas with dense human populations. Roosts and nests in woodland, or at forest edges, but may also spend the night on the ground, especially in migration.

WoW Bo, amazing that you could see that from those few remaining... Thank you so very much!

People kill everything everywhere, even in my country, though we have only 1 poisonous snake species and 0 really dangerous spider species. :(
So, I agree, education is needed a lot!
So good luck to us in educating process! :)

This is not different in Brazil, people kill the snakes they find in their backyards. They kill everything that moves.

Well Sintija, I dont have much hope for a snake ID. But I think it was quite big. Sckel, roads and snakes are a bad combination everywhere in the world, But here it is dangerous to be a snake in the first place. In all countries I have been working in, the locals always kills a snake if they get a chance (same goes for spiders and scorpions) (e ladrões)... :) I guess it is a human instinct and tradition to eliminate the danger, but it would be fantastic if they had alternatives... Education and training are needed in so many areas...

you should not have a joke with the snake, snake lovers are already lighting the bonfire for you.

wouldn't be surprised if someone could recognize the snake, too. It has some very distinctive patches..

Perfect guys! Updating! Happy to know what it is :) Now, what about the snake....?

Then it is settled: Milvus aegyptius parasitus

Thanks Fanie! Here's what Avibase has to say:
http://avibase.bsc-eoc.org/species.jsp?l...

Looks like Fanie and I did a double act with the comment and suggestion box :-)
Both Wiki and my African bird guide book (2003) have the species down as M. aegyptius but I'm not up to date with the most recent taxonomy.

Fanie and Daniele, you are a good team :) Thanks a lot!

Think it is a yellow-billed kite (Milvus parasitus) but confirmation required.