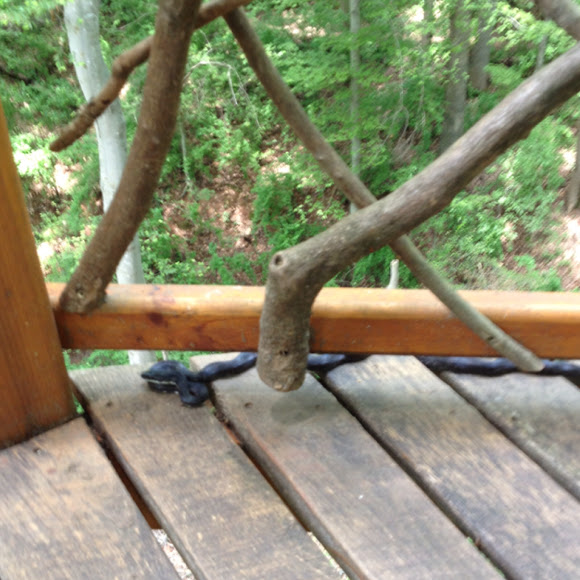 Formerly known as the "black ratsnake", this commonly seen snake is a solid, shiny black and grows to lengths of 42-72 in. (106.7-183 cm). It may show traces of a spotted pattern when the skin is stretched, as after a meal. The light areas of skin between the scales may be white, yellow, orange, or red. The belly displays a vague checkerboard pattern of gray or brown on white or yellowish. Juveniles have a pattern of black to dark brown blotches on a peppered black and white to gray body and a brown stripe from the front of the eye to the margin of the mouth. Adult black ratsnakes may be confused with adult northern black racer, Coluber constrictor; however, the latter has smooth scales, a round body in cross section, and white only on the chin. Juveniles are sometimes confused with small copperheads but the latter have brown hourglass-shaped crossbands and a yellow tip tail. The black ratsnake emerges from hibernation in April and mates in May or June. The eggs, numbering 5-25, are laid in July, in decomposing logs, mulch or sawdust heaps, or hollow trees. The eggs hatch in late August or September. This snake is often active just after sunset, when it may travel considerable distances.

This is a terrestrial species that also climbs trees. It is found in a variety of habitats, including agricultural areas, most types of hardwood forest, isolated urban woodlots, and forested wetlands. This snake is often found in barns and old buildings where preys on mice and other small rodents.

Non venomous This guy was getting some sun on platform 3 on the USNWC Canopy Tour. References: http://www.dgif.virginia.gov/wildlife/in...