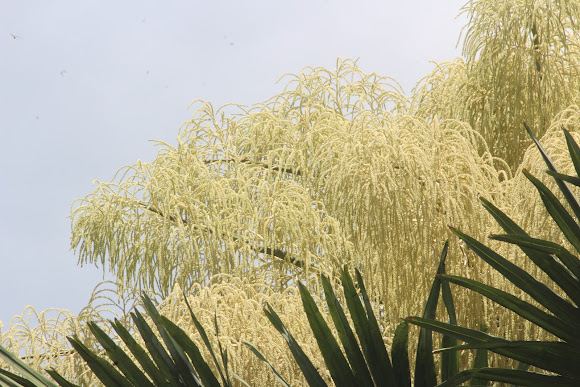 It is a species of palm native to eastern and southern India and Sri Lanka. It is also grown in Cambodia, Myanmar, China, Thailand and the Andaman Islands. It is a flowering plant with the largest inflorescence in the world.It is one of the largest palms with individual specimens having reached heights of up to 25 m (82 ft) with stems up to 1.3 m (4.3 ft) in diameter.[3] It is a fan palm (Arecaceae tribe Corypheae), with large, palmate leaves up to 5 m (16 ft) in diameter, with a petiole up to 4 m (13 ft), and up to 130 leaflets. The talipot palm bears the largest inflorescence of any plant, 6–8 m (20–26 ft) long, consisting of one to several million small flowers borne on a branched stalk that forms at the top of the trunk (the titan arum, Amorphophallus titanum, from the family Araceae, has the largest unbranched inflorescence, and the species Rafflesia arnoldii has the world's largest single flower). The talipot palm is monocarpic, flowering only once, when it is 30 to 80 years old. It takes about a year for the fruit to mature, producing thousands of round, yellow-green fruit 3–4 cm (1–1.5 in) in diameter, each containing a single seed. The plant dies after fruiting.

This palm was ones very common in Kerala, now there are only a few trees to be found. It could be considered as yet another 'martyr' of urbanisation.

"Historically, the leaves were written upon in various Southeast Asian cultures using an iron stylus to create palm leaf manuscripts. In South India, the palm leaves are used to make umbrellas for agricultural workers. The tree is known as kudapana (കുടപ്പന) in Malayalam, talo (/tɑːloʊ/, ତାଳ) in Odia, and kudaipanai (குடைப்பனை) in Tamil, which means umbrella palm. The plant is known as tala (තලා) in Sri Lanka, by local Sinhalese people."