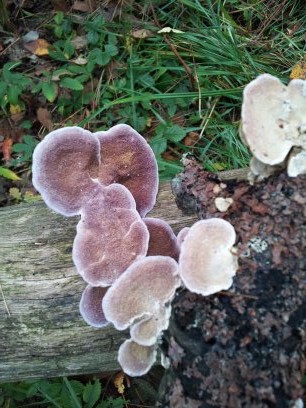 Viewed from above, Trichaptum biforme is a bland, boring polypore, reminiscent of any number of faded, ubiquitous, Turkey-Tail-ish species. If you were an ant, however, you might have occasion to crawl underneath this fungus and bask in its beauty; the fresh pore surface is a gorgeous lilac purple. Though there is no taxonomic significance to the idea, other covertly purple mushrooms include the gilled mushroom Laccaria ochropurpurea, which by maturity demonstrates its purple tendencies only to observers who turn it over to look at the gills, and Hapalopilus nidulans, which is so shy about its purple aspirations that a drop of KOH must be applied to coax it into a demonstration Sadly, the purple shades of Trichaptum biforme soon fade, leaving only the slightest hints of their former glory.

At first glance, this might look like the Turkey Tail mushroom. If you look closely, you will notice the lilac color at the edge of these shelf fungi, identifying them as Trichaptum biforme. The edge will stay purple as long as the moisture is high and the mushroom is growing. Turn it over and you will see the loveliest purple-lilac color you can imagine. Unfortunately, the color fades with time until the spore surface is a buff-tan color with just a hint of purple. The common name for Trichaptum biforme is Purple Tooth. This is a misnomer, as this is not a toothed fungus, but is instead a polypore. The spore surface becomes rough with age until it appears to have spines or teeth, thus the common name of Purple Tooth. Purple Tooth grows in overlapping clusters on stumps, logs, and small dead hardwood trees. If you find a cluster on conifer wood, it is a closely related species, Trichaptum abietinum. It is not unusual to find a small tree completely covered with Trichaptum biforme. This is one of the most commonly encountered fungi in North America, second only to Schizophyllum commune. It is so common, there is a parasitic fungi that only grows on Purple Tooth, and can be use to confirm the identity of the host. Next time you see a large cluster of Purple Tooth, look carefully for some tiny black “pins” in rows on the top surface. These Fairy Pins are Phaeocalicium polyporaeum and are just barely visible to the naked eye. Purple Tooth and Fairy Pins are two of my favorite fungi – Purple Tooth for its gorgeous color, and Fairy Pins because they are common, but few people ever notice them. http://iowamushroom.org/featured_mushroo...

Ecology: Saprobic; growing in overlapping clusters on hardwood logs and stumps; late spring, summer and fall; found in all 50 of the United States and all the Canadian provinces; in eastern North America it is one of the most commonly encountered fungi. Trichaptum biforme is a voracious decomposer of dead wood. It causes a straw colored sapwood rot in standing trees. Cap: Up to 6 cm across and 3 mm thick; more or less semicircular, irregularly bracket-shaped, or kidney-shaped; flattened-convex; hairy, finely hairy or fairly smooth; with zones of whitish to grayish white colors; the margin sometimes pale lilac. Pore Surface: Purple to lilac, with the strongest shades near the margin; fading to buff or brownish in age; with 3-5 angular pores per mm; usually eroding and developing spines or teeth with maturity (sometimes appearing more like a toothed mushroom than a polypore); not bruising. Stem: Absent. Flesh: Whitish; tough and leathery. Chemical Reactions: KOH negative to pale yellowish on flesh and cap surface. Spore Print: White. Microscopic Features: Spores 6-8 x 2-2.5 µ; smooth; cylindric to slightly allantoid; hyaline in KOH; inamyloid. Cystidia abundant; up to 35 x 5 µ; more or less fusoid; apically encrusted. Hyphal system dimitic. REFERENCES: (Fries, 1833) Ryvarden, 1972. (Saccardo, 1905; Overholts, 1953; Smith, Smith & Weber, 1981; Gilbertson & Ryvarden, 1987; Phillips, 1991/2005; Lincoff, 1992; Metzler & Metzler, 1992; Evenson, 1997; Barron, 1999; Roody, 2003; McNeil, 2006; Miller & Miller, 2006; Binion et al., 2008; Kuo & Methven, 2010.) Herb. Kuo 07170404, 06090703. Trichaptum biformis is a synonym. Trichaptum abietinum grows on conifer wood; it has a grayer, hairier cap surface, and retains its purple shades longer. Trichaptum subchartaceum is larger, grows on the wood of Populus species, and does not develop teeth or spines on its pore surface.

picture is to small - compare to Trichaptum species